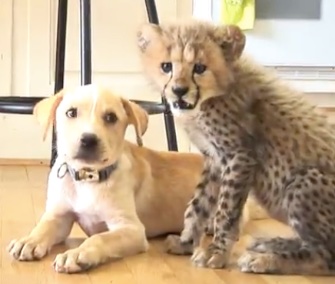 YouTube
Kumbali the cheetah cub and Kago the Lab mix puppy have become best buddies at the Metro Richmond Zoo in Virginia.

At zoos around the country, cheetah cubs are sometimes paired with companion puppies to help calm their nerves — and cuteness often ensues. That’s clearly the case in Virginia, where a hand-reared cheetah cub named Kumbali recently met a Lab mix named Kago, who was rescued from a local shelter. Kumbali was removed from his mom and siblings at the Metro Richmond Zoo when he was 2 months old because his keepers found that he was losing weight. After a little bit of tension at their first meeting, the little ones have quickly become friends. The zoo says the pair will remain together as long as it seems to be the best thing for Kumbali. “Their bond has become brother-like, and the two are inseparable,” says the narrator of a YouTube video of them. — Read it at Discovery News