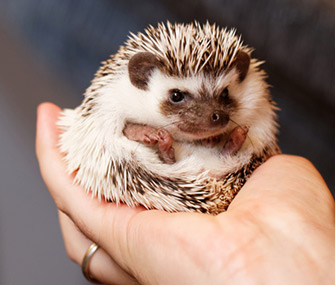 Thinkstock
Don't let exotic pets wander your home without supervision — they could get into all kinds of trouble. Instead, monitor them whenever they're out of their cages.

When people hear about commonly kept small mammal pets such as rabbits, guinea pigs, chinchillas, hedgehogs, ferrets, rats, hamsters and gerbils, they don’t usually think of them being at high risk for getting into trouble in the home. However, if you own one of these pets, there are certain home hazards you should be aware of. These little creatures are clever, curious and very capable of getting into things that they shouldn’t.

1. Electric cords are so much fun to chew!

Wires commonly contain heavy metals like zinc and are oh-so-tempting to gnaw on. Small mammals that chew on and ingest wires commonly develop zinc poisoning, which can lead to gastrointestinal (GI) upset, blood disturbances and even death. Some wires also contain copper, which can be lethal as well. Electrical cords can be a chewy treat for small mammals when they find them running along baseboards on the floor or when they are sitting on furniture near electrical plugs. When chewed on, live electrical wires can also cause electrocution and instant death or, at the least, severe oral burns. So whenever your little buddy is “cage free,” he or she must be monitored at all times. If you have these small pets, all wires and cords must be safely secured so your pet cannot access them. Wires can be enclosed in PVC piping and whenever possible, plugged into higher outlets.

Many construction materials used in homes, especially older homes, including paint, linoleum and dry wall, may contain lead. These materials are commonly used to build walls and floors — places easily accessed by free-roaming small mammal pets. Baseboards, floor edges and other places where small mammals can hide and chew endlessly without being noticed can be deadly for them if the items they chew on contain lead. Lead causes nerve damage, severe GI problems, anemia and even death. Keep pets away from chipping paint and other potentially lead-containing substances, as even a few bites of these materials can be deadly for smaller pets.

3. Not so terrific treats

Several items marketed as treats for small mammals, such as yogurt drops, seed sticks, raisins and other inappropriate foods, are not really meant to be fed to them. These items contain high levels of sugar and fat that most of these pets’ GI systems are not built to handle. Consumption of these so-called treats can lead to significant GI disruption and, in some cases, death. The rule of thumb is that herbivores, such as guinea pigs, chinchillas and rabbits, should not eat excessive sugar, as found in raisins and yogurt drops, or excess fat, as found in seed-based treats. Small amounts of fresh vegetables, such as carrots, are appropriate treats for these pets. Ferrets, who are carnivorous, and hedgehogs, who are insectivores (insect-eaters), are better offered high-protein treats, such as low-salt deli meat for ferrets, and high-protein cat food or mealworms for hedgehogs. Occasional treats can be delicious and fun to feed; just use them judiciously.

Most small mammal pets live very comfortably at temperatures that are comfortable to us. However, some small mammals are sensitive to very high or very low temperatures. For example, chinchillas and rabbits have thick coats and cannot sweat. They can get overheated at temperatures above 80 degrees Fahrenheit and can die. Hedgehogs, on the other hand, are subject to a condition called torpor when it gets cold. At temperatures below 70 degrees Fahrenheit, they enter a state of hibernation. Their heart rate drops, their metabolism slows and they become more susceptible to illness and ultimately to death if they remain at that temperature. Therefore, it is critical that small mammals, depending on the species, are kept within their optimal temperature ranges to flourish and stay healthy. Consult your veterinarian to learn how to keep your particular pet safe and comfortable.