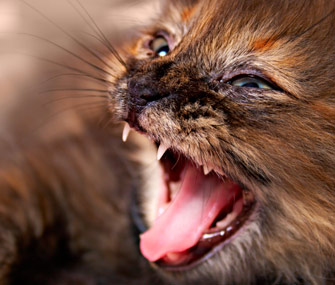 Like human babies, feline babies aren't born innately knowing how to be good. In fact, they're born innately knowing how to get into mischief. Your job is to curtail that misbehavior and, when it gets out of hand, redirect it into acceptable behavior. Of course, some kittens are wilder or more aggressive or harder to litterbox train or more fearful than others, and these kittens may need a little more work, training and socialization.

Inappropriate elimination of feces or urine is one of the most common complaints of kitten owners. Most often, failed attempts at litterbox training have expected too much of the kitten, with owners often assuming that kittens train themselves to use a litterbox. They don't. If they are given the opportunity to use a litterbox at the appropriate age, it may seem like they train themselves, but if not, they can train themselves equally effectively to use your carpet, a pile of laundry or any other place they grow accustomed to using as a makeshift litterbox.

Often, kittens are expected to use a litterbox that has sides that are so hard for them to climb that they opt for an easier spot. A kitten may avoid the litterbox because it's too out of the way, or because it's next to where the dog who chases him sleeps. He may also avoid it because it smells strongly of harsh chemicals or urine, because the litter is scented (most cats prefer unscented litter), because the litter is dirty or because he doesn't like the texture of the litter. Try different boxes and litters, and go back to basic litterbox training.

Occasionally, a kitten has an illness that makes getting to the box in time impossible. In these cases, your veterinarian will be the best source of advice.

If your male kitten is intact, he may begin spraying as early as 5 months of age. Occasionally, neutered males and even females also spray.

Play aggression is part of growing up for cats — to a point. Play fighting and play hunting are important practice for behaviors that adult cats would need if they were growing up in the wild, and may still need growing up in many domesticated situations. Kittens normally play with their littermates, chasing and pouncing and wrestling and biting and scratching. Without littermates, you become your kitten's sparring partner. When playing with their littermates, kittens learn how to hold back on the intensity of their biting and scratching, because when they get too rough, the other kitten either retaliates or quits playing. Kittens raised without littermates don't learn this, however, and are especially prone to overly aggressive play.