Home ›
Our Pet Experts ›
Laura Cross ›
Confessions: What Our Readers Have Given Up for Their Dogs

Confessions: What Our Readers Have Given Up for Their Dogs 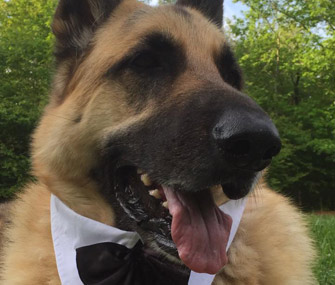 Wendy Tatum Prillaman via Facebook
Ben has separation anxiety, so his owner works from home so the dog doesn't have to be home alone.

We wanted to know, what have you given up for your dog? We posed this question to our Facebook fans, and here’s how they responded.

Many of our Facebook fans said they gave up their beds, couches and other furniture for their dogs. Reader Anna Gardner says, “I gave up having a beautiful bed. It's more comforting to have my dogs sleep with me.” To take it one step further, Janee Hodges wrote on Facebook that she buys her furniture and vehicles based on the comfort of her dogs.

But reader Ev Woyak’s response might take the cake: “Our entire house belongs to [my dog]. She just allows us to live here (as long as we don't take up too much room in the bed).”

Owning a dog sometimes forces you to adapt your method of traveling, but many of our Facebook fans wouldn’t have it any other way. Reader Linda Jenkins says that after she retired 11 years ago and got a Yorkie, she gave up airplane travel. Instead, she goes on road trips and has seen more of the United States than she ever has before. She says it’s a “win-win with a little girl who makes us laugh every day.”

When Facebook fan Jill Gibbs’ dog got too old to get in her pickup truck, she bought a minivan. And Nicky Butler didn’t let the expense of transporting her pets from Kenya stop her from bringing them with her. “I went broke to make sure all my furry ones could come back from Kenya with me when I had to leave. [I would] rather be financially broke than emotionally!” 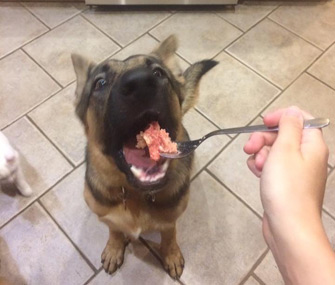 Jule Schweighoefer via Facebook
This pup's owner gave up her mornings so she could spend time getting her picky dog to eat.

If you’re a dog parent, you know that many times your dog’s wants and needs conflict with your schedule. Reader Jule Schweighoefer says she’s given up her mornings to get her “picky monster” to eat. Wendy Tatum Prillaman works from home and avoids going anywhere dogs aren't allowed so she doesn’t have to be away from her dog, Ben, who has separation anxiety.

Similarly, Maryse Acriviadis also doesn’t like to be apart from her dog. She says she’s given up holidays for her pup: “Can't leave my dog for more than a couple of days!” Reader Terry Rigsby says she gave up her freedom for her dog, but the sacrifice seems to have been worth it. “[I]t's a small price to pay,” says Rigsby. “When I was sick and homebound for months and months she was by my side and helped take care of me. So I owe her big time.”

As dog lovers, we think this quote from reader Helen Louise Seward perfectly sums up the sacrifices we make for our dogs: “My life revolves around my dogs. That's all I need to say.”