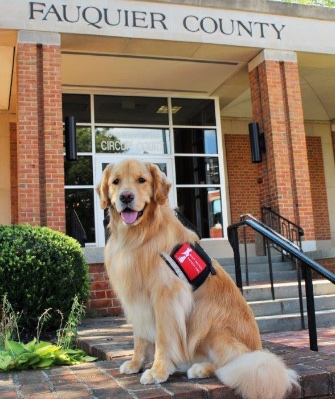 A growing number of assistance dogs are working in the criminal justice system around the country, helping traumatized crime witnesses cope with the stress they face as they relive their stories.

Facility dogs like Lincoln, a Golden Retriever trained by Saint Francis Service Dogs in Virginia, help witnesses through the legal process, from evidence gathering and hearings to sitting on the witness stand in the courtroom.

She recalls one situation in which a young assault victim was crying and shaking with her head on the table, unable to get the words out about what had happened to her. But when Lincoln entered the room, Jones says the victim looked up and stopped crying. She spent about 20 minutes telling investigators her story as she patted Lincoln's velvety ears.

“It blows me away that people have this reaction to this dog,” Jones says. That’s just one of countless instances where Lincoln, and dogs like him, have made a difference.

There are now 95 of these dogs at work in 29 states across the U.S., according to the nonprofit Courthouse Dogs Foundation. The Washington state-based foundation works with accredited assistance dog schools to help place the dogs, primarily in victims’ advocacy centers and prosecutors’ offices. A specific individual from that office is trained by the school to become the dog’s handler — and the Courthouse Dogs Foundation works with the rest of the staff to educate them on what the dog can and can’t do. The programs are usually implemented after someone in the system hears about the idea and wants to bring a dog to his or her area.

Much like guide dogs, facility dogs are bred specifically for their assistance work. For example, facility dogs trained by Canine Companions for Independence (CCI) in California live with volunteer puppy raisers who socialize them until they’re about 18 months old, then they go back to the school to be trained by professionals for six to nine months. Once they're placed with their handlers, the handlers spend another two weeks training at the school with the dogs before they go to work. CCI has trained about half of the courthouse facility dogs who are currently working. The dogs live with their primary handlers and are always accompanied by them, or someone else trained to handle the dog, at work.

The victims these dogs help are some of the most vulnerable to come through the legal system — children, rape victims or others who’ve witnessed horrific crimes.

The Courthouse Dogs Foundation's executive director, Celeste Walsen, DVM, says the programs work best when the dogs are involved in each phase of a case.

That often starts with helping forensic interviewers build a trusting relationship with the children or other victims with whom they work, Cynthia Gevedon, a forensic interviewer who works at the Michael’s House Child Advocacy Center in Fairborn, Ohio,says. 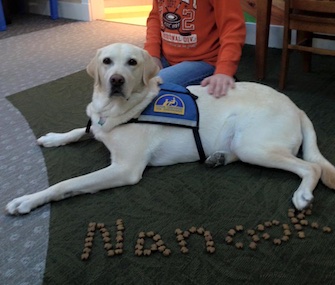 Gevedon has worked with Nanook, a yellow Labrador Retriever who was trained by CCI, for nearly four years.

“In the very beginning, he’s utilized as a rapport builder,” Gevedon says of Nanook. “He is able to help us have something in common for a conversation starter. He is a neutral, nonjudgmental being who's introduced in the mix. So while Nanook and I are usually strangers to children and families the first time they come to the center, I’m a person that they may worry about—what’s my reaction going to bewith the things they say or what’s my disposition going to be like with them. … But with the dog, it’s very nonjudgmental, and it can also help break down some barriers of some of those fears and worries.”

The dogs sometimes work with children who are just 5 or 6 years old and don’t even have the vocabulary to explain what happened to them. “Here they are, coming into our office… telling this stranger [about] the worst thing that’s ever happened to them,” Jones says.

She recalls a case where a girl who was about 7 or 8 years old met Lincoln during a community holiday event for children who’d had contact with the sheriff’s office or social services. Months later, she was sexually assaulted. “She didn’t want to talk, but she said, ‘I met Lincoln, and I’ll tell him,’” Jones says. So Jones brought the dog in, and the girl sat on the couch with him and told a prosecutor her story for an hour and a half.

The handlers have also found that their highly trained dogs can help empower witnesses.

Gevedon remembers how a teenage girl who was a crime victim was about to take the witness stand in a sensitive case. She was agitated and nervous — until she was handed Nanook’s leash.

“Each time I would hand her Nanook’s leash, the shaking would stop, her voice would be very strong and she was able to stabilize,” Gevedonsays.

She and Jones say that teaching victims simple commands they can give the dogs is another way of giving them back some control.

“It’s very empowering,” Gevedon says. “Most often when somebody is victimized, they will feel a sense of loss of control. By allowing children to work on some of the commands with Nanook, it helps them gain that sense of control back.”

There’s also some science behind how dogs in general can help change the person’s neurophysiology, Dr. Walsen says.

“Having the dog to hug raises [the witnesses'] oxytocin, raises their serotonin, reduces their cortisol, reduces their pulse and heart rate, keeps that child calm,” Dr. Walsen says. “It’s not a panacea, but it goes a long way down that road, so that when the child comes to a child advocacy center and there’s a dog there… it seems like home.”