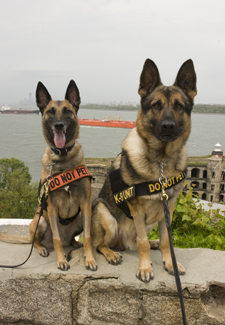 Petty Officer 2nd Class Jetta H. Disco
Camilla and Satu are two of only 14 explosive-detecting dogs who work for the Coast Guard.

There are certain individuals who are just programmed to do amazingly heroic things day in and day out, from fighting four-alarm fires to plucking people from rain-swollen rivers. But some of the more dangerous jobs that humans do, skilled canines can often do better.

Vetstreet looks at four types of fearless pups who approach their high-adrenaline day jobs with grace — and plenty of gumption — under pressure.

It's a drizzly morning on Staten Island, N.Y., and two dogs are demonstrating their sniffing techniques for tracking down the scent of explosive materials.

Camilla, a Belgian Malinois, and Satu, a German Shepherd Dog, take turns with their handlers, Petty Officer 2nd Class Nick Heinen and Petty Officer 2nd Class Jason Agar, at detecting contraband as easily as some dogs find favorite toys. Of course, when your pup goes in search of a rubber bone, you’re probably not left wondering if that chew toy happens to be attached to a timer.

These bomb-sniffing dogs, however, are trained to passively show that they've located something, as opposed to drug-sniffing dogs who often scratch at illegal goods. (If a dog were to scratch at a bomb, well, you get the picture.) There are only 14 such highly trained dogs in the Coast Guard — along with the same number of handlers — so it's a sought-after position among the 50,000 people in active service.

While stationed in Virginia, Heinen shut down an entire cruise ship terminal after Camilla “sat" on some suspect luggage. Luckily, the find was a false positive, but Camilla certainly proved her scenting skills. “The bag was from a guy who was in EOD [explosive ordnance disposal] over in Iraq, so the bag was in contact with explosives, and my dog got the scent," Heinen explains. "She did what she was supposed to do.”

When they aren’t working missions like inaugurations, international political conferences and other high-profile events, the handlers and their dogs train. “From the outside looking in, you see K-9 handlers walking their dog and think, ‘Man, they don’t do anything,’ ” says Agar. “[Heinen] and I are the hardest-working guys in our unit.”

Much like Coast Guard canines and many other working dogs, Bounce, a black Labrador Retriever who works for a company called Tekscent, follows his nose to chase down pipeline leaks that can cause big problems for petroleum companies.

“Although the dogs are almost always quick to find the leak, it seems like a miracle every time that they spot one, five or 10 miles down the pipe,” says Edward Griffin, director of operations for Tekscent. “Pipeline workers watch in awe of the dogs' desire to move down the pipe.”

Though tracking down flammable fuels seems perilous, Griffin claims that the biggest dangers faced by Bounce and other leak-detection dogs are actually ticks and snakes. “The pipeline is usually underground, and the dogs are looking for our patented odor, which signifies a leak," Griffin says. "The petroleum industry goes to great lengths to provide a safe work environment, as do we.”