Do People Think Your Dog Looks Scary? How to Overcome Breed Stereotypes 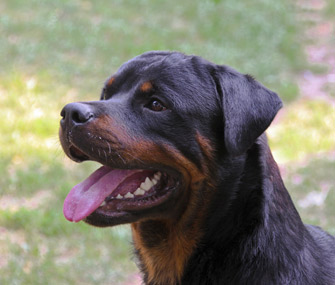 Q. People are terrified when they see my Rottweiler because he’s an intimidating-looking dog. But he has a great disposition and wouldn’t hurt anyone. How can I help people see him in a different light?

A. The reactions people have to your dog are likely due to widespread misconceptions about the breed. People may be more fearful of a Rottweiler than a Labrador because the Rottweiler is stereotyped as being more aggressive than the Lab.

My Pug, Willy, is a Pet Partners therapy dog; he works with people who are afraid of dogs. One time, though, when he was wearing a spike collar at an off-leash dog park, we came upon a woman who was clearly terrified of him. “It’s a Pit Bull!” she shrieked. It didn’t matter that Willy only weighed 15 pounds and was calmly sniffing and exploring the park; the fact that he had a spiked collar and remotely resembled a Pit Bull sent her into a panic attack — not because of his behavior, but because of her assumptions about that particular breed.

Origins of a Misconception

Genetics certainly play a role in a dog’s behavior, but the way a dog is raised also shapes the dog’s behavior. A dog can be taught to be aggressive, no matter what its breed — and so-called “aggressive” breeds can raised to be loving members of a family

Certain breeds, like the German Shepherd, Pit Bull, Rottweiler, Doberman and Mastiff, are disproportionately chosen as personal protection dogs and are more likely to be raised and trained to be aggressive — often by dog owners who lack good training skills. This can lead to a dog who is aggressive out of fear, rather than by nature. Unfortunately, because certain breeds are favored by people who want to raise guard dogs, these breeds are often assumed to be naturally aggressive.

Pit Bulls are a good example of a breed that has gotten an unwarranted reputation as aggressive and dangerous. Pit Bulls have come to be associated with dog fighting, largely because of media coverage of high-profile cases involving dog fighting rings. Fighting dogs are terrified and forced to literally fight for their lives, not because they inherently enjoy it, but because they’re kept in a situation where they have no choice.

A Pit Bull is not aggressive because is a Pit Bull; a dog, no matter what its breed, will be aggressive if he has been raised in an environment that encourages aggression. But news stories rarely make this distinction, and the misperception about this breed — and others — lingers.

While all dogs should be trained, it’s even more important that breeds that will be held to a different standard, like your Rottweiler, be well trained. In my work with dogs in the shelter system, I use certain tactics with so-called “intimidating” breeds to help their outward appearance match their inner sweetness. The key is for your dog’s behavior to accurately represent the friendly, loving and sociable canine that he is.

One of the simplest ways to do this is to teach your dog good manners. A dog straining forward on the end of the leash is more likely to appear threatening than a dog walking calmly at your side on a loose leash, so heeling is essential. Additionally, teaching your dog to automatically sit when you stop helps people to perceive him as well-behaved and sociable, rather than seeing him as a threat.