Home ›
Our Pet Experts ›
Kristen Seymour ›
Do You Have a Favorite Pet?

Do You Have a Favorite Pet?

Even if you profess to never play favorites, you would be hard pressed to argue that some animals are simply easier to love than others. It's not hard for a charming, affectionate, well-behaved dog to earn your heart. A skittish, defensive cat who won't come out from under the bed (or use the litterbox) is a somewhat tougher sell (even though, as we know, there are lots of ways to help a kitty like this become more confident and comfortable in her surroundings, so if you have such a cat, have patience!) 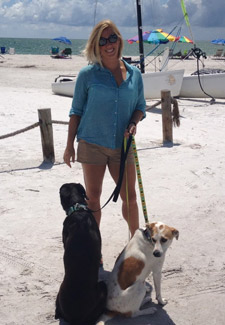 Kristen Seymour
Rudi, the black dog, and Hollie, the white one, are also pretty easy to love, although they'll never replace Yuki, of course.

Sometimes, the less ideal qualities in one of our pets can make us especially appreciative of the good qualities in the other. For example, our younger dog, Hollie, is quite vocal. She's quick to bark and rarely hesitates to let loose with a howl. I doubt I would appreciate just how quiet Rudi is if we'd never brought home Hollie the hound, just as I didn't understand just how easy it was to train Yuki until Rudi joined our family.

And in some cases, that can change from one day to the next depending on which animal is behaving better, or perhaps based on which pet is more in need of an owner's care — as can be the case with a sick, injured or aging pet.

When it comes to first pets being the favorite, that's not a hard concept to understand. There's a special bond between an owner and the first pet who gives him or her that title. There's a learning curve involved—a journey that the two of you are on together, and that's an experience that you'll never quite replicate with another pet. No wonder so many owners admit that their very first pets hold a special place in their hearts.

Whether or not you admit to preferring one pet over another, there's one thing you should remember. It's fine to play favorites (to an extent), but it's important to make sure each pet in your family receives a share of your love and attention (not to mention proper vet care). Because if I've learned anything through the years (and the cats and the dogs), it's that even when one animal seems to be taking up my whole heart, there's always plenty of room in there for another animal. Always.