Home ›
Our Pet Experts ›
Kristen Seymour ›
Do You Keep Your Cats Off the Counter? We Polled Vets and Pet Owners

Do You Keep Your Cats Off the Counter? We Polled Vets and Pet Owners 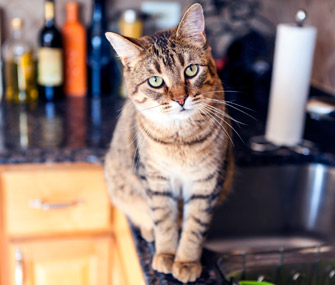 For those who answered that they generally let their kitties up on the counter, we dug into the reasons why. The main reason veterinary professionals gave their cats a pass to get on the counter was to give them a high place where they feel safe (35 percent), while the most common answer among readers was that they simply weren’t bothered by it (39 percent).

Of course, cats will be cats, and 22 percent of veterinary professionals and 17 percent of readers stated that they couldn’t keep their cats off the counter even if they tried. However, when we factor in the large number of write-in answers echoing that statement, it appears this is the most common reason for both groups. It’s not that it’s allowed, per se, but there’s only so much you can do to keep a cat from getting up there, especially when you’re not home!

(For the record, we've got some sound advice from Dr. Marty Becker on how to keep cats off kitchen counters, if you're so inclined.)

When it came to cat owners who rarely allow cats on the counter, the answers were a little more involved. Providing an escape route was still a top answer, this time for both groups (27 percent for veterinary professionals, 29 percent for readers).

But here’s where it gets a little more interesting: 18 percent of veterinary professionals admitted it was just a matter of being less than diligent about keeping the cats off the counter (vs. 14 percent of readers), while the second most popular answer for readers was that they didn’t allow cats on the counter while they were cooking, but otherwise it was fine (16 percent vs. only 7 percent of veterinary professionals).

Just 2 percent of veterinary professionals and 5 percent of readers worried about keeping cats off the counter when guests were present. (Of course, we'd certainly hope that any guests present would have the good sense to not say something rude about it!)

Among those who said they did not allow counter-hopping behavior, the majority of both groups said it was because of concerns about it being unsanitary (66 percent of veterinary professionals, 51 percent of readers).

A number of those who kept cats off the counter in both groups mentioned that their cats had plenty of other high places, like cat towers and perches, where they were allowed and encouraged to retreat, so they didn't feel the need to give Fluffy free range near the food prep station as well.

How do your own responses stack up? Do you always, rarely or never allow your cats on the counter? Tell us why in the comments!

[i]Results based on a survey completed in March 2014. Number of pet owner respondents: 1,016; number of veterinary professional respondents: 167.

Want to stay up-to-date on the latest pet news and have the opportunity to participate in our next survey? Sign up here.