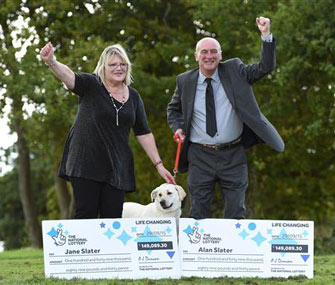 Ruby the yellow Lab is quite the good luck charm. Her owners, Jane and Alan Slater, live in the U.K. and had just won about $230,000 in the lottery, when Ruby found a ticket that doubled their winnings. The ticket had been tucked away in a catalog in the back of the couple’s car until 2-year-old Ruby found it and dropped it at Jane’s feet. The second ticket was worth the same amount of money as the first. “We both burst into tears when we saw the second ticket was also a winner,” her husband said. “It all happened in such a magical way.” — Read it at People Pets