Home ›
Our Pet Experts ›
Dog Park Etiquette: What You Can Learn From My Mistakes

Dog Park Etiquette: What You Can Learn From My Mistakes 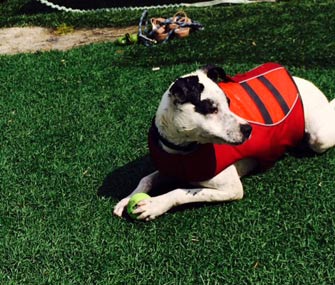 Courtesy of Carolyn Magner Mason
Can Hank the Handful master the art of the dog park?

I don’t have any life experiences with dog parks. A fenced space designated for dogs would have confounded Old Man Doug, who was not particularly fond of his fellow four-legged creatures. But Hank the Handful needed more exercise than I could provide on our daily walks, and I thought it would be fun to meet other dog parents. Though, I admit, I didn’t know they were called dog parents. “Who is this dog’s parent?” screamed one woman, holding her dog above her head as Hank leaped in the air, nipping at her poodle’s painted toenails. I hid behind a tree because, truthfully, I’m a coward. And somehow, I didn’t think my rescuing-Hank-from-a-shelter story would impress her. She was really mad. As soon as she got her pup away, I grabbed mine and dashed to the car. Perhaps we should learn the art of the dog park? Apparently, as I discovered, there are lots of ways to breach the dog park rules.

I didn’t know you shouldn’t bring treats to a dog park. It’s not on the sign. Besides, my trainer (I love saying that. It gives my decisions a certain heft) says to treat him when he obeys. And that means I always have a lot of liver nuggets crammed in my pockets. So when I entered the park for the first time and all the dogs swarmed me, I gaily called out that dogs just love me, ha ha ha! The pet parents shook their heads with disgust.

“You have treats,” hissed the owner of a Great Dane. I tried to deny it, but the beastnow had me on the ground and was gumming my pockets with a tongue the size of a zucchini.

It never occurred to me that not only was I causing a ruckus, perhaps not everyone wanted their pet to accept food from strangers. I get that now. I slunk out of the park with my dog and a pocket full of liquid liver.

Severity of rule breaking: 6 bones (not good, but I've learned my lesson)

My two daughters started preschool as biters. Once we were in the grocery store and a bitten child pointed to my daughter and yelled out, “Her bite me!” I was duly shamed. Hank is a bit of a bully. His trainer says it’s his play style, but the object of his body slamming is usually a submissive fluffy spaniel with soulful brown eyes. After he throws her to the ground, he tops it off by dragging her around by her ears.

“You should leave,” says one outraged park mother. And of course, I do. I snap on his leash and haul him out in disgrace. I am not raising a bully on purpose, and clearly we have some more work to do.

Severity of rule breaking:10 bones (as bad as it can get) 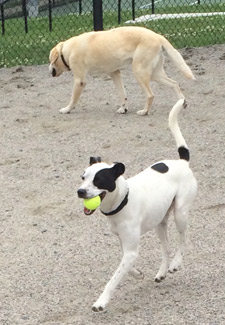 Eureka! Hank has stopped bullying other dogs! Instead, he obsessively and compulsively fetches his tennis ball. But it has to be one particular, chewed up, dirty, squeaky ball that I guard with my life. Now, dog park world is a joy. He ignores all the fluffy submissive dogs and focuses intently on retrieving.

Until, one day, a Boxer took his ball and ran off with it. Hank skidded to a stop. We both looked at the Boxer, prancing around, squeaking the ball. Hank turned an interested gaze in the direction of a docile Beagle, so I hurried up to the Boxer parent. “Um, would you mind getting our ball back?” I tried to explain how Hank had substituted his negative behavior toward other dogs with the ball-fetching behavior and only that particular ball would do. He looked at me and said frostily, “This is a dog park.”

I don’t know exactly what that meant. Probably something about how all toys are fair game. I picked up a random ball and threw it toward the Boxer, hoping he’d drop our ball.

“We’ll leave,” said the parent, making a big point of it. But I know my exit cue by now and out we go.