Home ›
Our Pet Experts ›
Mikkel Becker ›
Dog Parks: Are They for Everyone?

Dog Parks: Are They for Everyone? 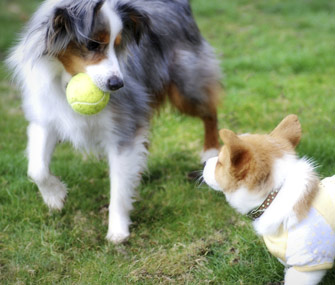 Dog parks are a staple in America’s canine culture and serve as the go-to destination for many canines and their human companions. The doggie-designated zones, which are usually enclosed, have many benefits for well-balanced pups, including the freedom to run and explore as well as play, socialize and interact with other dogs and people.

But though many dogs thrive at dog parks, not all canines are ideal candidates for off-leash playgrounds. Some dogs become stressed, conflicted, fearful or out of control with excitement. As a result, negative interactions, including dog fights, may occur. Not only do such situations present the potential for physical harm to those involved, but a dog may be damaged emotionally and behaviorally by the experience.

In this first installment of a multipart series on dog parks, trainer Mikkel Becker looks at how to tell whether a dog park is right for your dog and discusses consequences to consider when playtime turns ugly.

Not All Dogs Want to Play

As an animal trainer, I've encountered numerous pet parents who are frustrated and upset with their dog’s behavior at the dog park. Some dogs may be reluctant to play and interact and only tolerate the experience, which can frustrate people who want their dogs to be social. Others have concerns over behavior from their dogs such as fear-based reactions, overly aroused pushiness or unpredictable interactions that sometimes end in aggressive encounters.

However, just because a dog isn’t right for the dog park doesn’t mean the dog is a bad dog. It simply means the dog would fare better in other situations more fitting for him. For instance, some dogs are social only with select playmates, and playdates with known friends may be best. Or, for dogs who are fearful or avoidant of other canines or escalate into aggression, activities with people only, such as training sessions or scent work, is preferable.

Not every dog is savvy with social situations, especially one as varied and unpredictable as the dog park. The expectation for all dogs to love the park is like the expectation of a parent that his son or daughter will enjoy the same sports or activities that he did. But being pushed into something that’s not the right fit for that individual’s personality and desires can cause tremendous stress to the individual.

Just like people, dogs have personalities and motivations that make them either good fits for dog parks or not. Just as joining a fraternity or sorority is a good match for many people, it’s an equally poor match for others (as it was for me). And those differences are OK.

Many pet parents live with the unspoken rule that "good dogs go to dog parks" and "good people take their dogs to dog parks." The negative connotation of their dogs not being good fits for a dog park often causes guilt and shame. For that reason, despite a dog’s hesitance or involvement in negative incidents, upset dogs are frequently taken to the park in hopes of making the canine more social. With most dogs, when a park is used to “fix” social issues, the behavior only becomes worse.