Doggy Drama Is Nothing New to the Presidential Campaign Trail 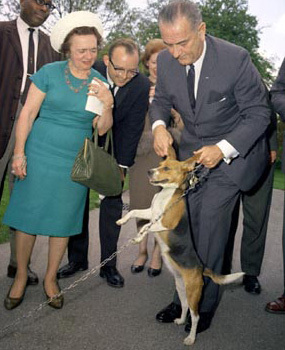 Via the Presidential Pet Museum
President Lyndon B. Johnson lifts his Beagle, Him, by the ears in front of White House visitors.

President Harry S. Truman once famously said, "If you want a friend in Washington, get a dog." Unfortunately, that's not always true for presidential candidates. Or presidents, for that matter.

Former Massachusetts governor and presumptive Republican presidential nominee Mitt Romney can't seem to live down the story of a family vacation in the 1980s, when he strapped his Irish Setter's crate to the roof of his station wagon. The Boston Globe first reported the story in 2007, but rival Newt Gingrich brought it back with a recent campaign video. Now the story is making headlines again: Romney's wife Ann Romney told ABC News' Diane Sawyer that Seamus, the Setter, loved the crate, since it meant he was going on vacation with the family.

But the dog wars aren't confined to the challengers; this week, the conservative blog The Daily Caller pointed out that President Barack Obama wrote in his book, Dreams From My Father, that he ate dog meat while living in Indonesia as a child. We're not sure what either of these stories have to do with the ability to serve as commander-in-chief, but it's not the first time that canine-related bloopers have threatened to land presidential candidates in the dog pound. It turns out that faux paws have always dogged candidates on the campaign trail.

President Lyndon B. Johnson owned a pair of Beagles named Him and Her during his years in the White House. He was frequently photographed playing with the dogs on the White House lawn, according to the Lyndon Baines Johnson Library and Museum. But the president offended dog lovers nationally in 1964, when he lifted Him by the ears in front of a group of visitors. The picture ran in newspapers across the country, and the American public was not as amused by the act as the onlookers in the famous photograph.

On September 23, 1952, vice presidential nominee Richard Nixon delivered what famously came to be known as the "Checkers Speech," in response to allegations of misuse of campaign funds. "We did get something, a gift, after the election," he confessed during the half hour address. "A man down in Texas heard Pat on the radio mention that our two youngsters would like to have a dog, and, believe it or not, the day we left before this campaign trip, we got a message from Union Station in Baltimore, saying they had a package for us. We went down to get it. You know what it was? It was a little cocker spaniel dog, in a crate that he had sent all the way from Texas, black and white, spotted, and our little girl Tricia, the 6-year-old, named it Checkers." Defiant, Nixon declared that regardless of any backlash over the gift, his family would keep the puppy. Despite the speech, Nixon was retained on the Republican ticket, and he and Dwight D. Eisenhower went on to win the 1952 election.