Home ›
Our Pet Experts ›
Linda Lombardi ›
Dogs for the Deaf: The Essential and Amazing Things They Do Every Day

Dogs for the Deaf: The Essential and Amazing Things They Do Every Day 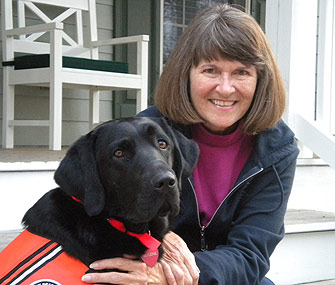 Courtesy of Dogs for the Deaf
Raylene the hearing assistance dog alerts owner Chris Goodier to sounds like the phone, doorbell and smoke detector.

Chris Goodier had been losing her hearing for years, but she'd always gotten around without trouble until, one day, she was on a business trip and her flight was diverted in a blizzard.

"I explained to the flight attendant and later to ground personnel that, with severe hearing loss affecting both ears, I could read their lips but not understand announcements onboard or in the terminal," she says. Despite their promises, no one ever told her what to do, and all she could do was look for passengers she recognized and follow them around.

"That trip was a depressing wake-up call," she says. "My hearing loss of 35 years had progressed to the point that I could no longer travel alone and would have to rely on my husband, Bob, to accompany me."

But then Goodier met some people from Dogs for the Deaf in Oregon, and now she has someone else to rely on, at least in many situations where her hearing loss presents an issue: Her hearing assistance dog, a Labrador Retriever named Raylene. Raylene cannot discern one flight announcement from another, but the ways in which she makes Goodier's day-to-day life and travel easier are nearly countless.


Choosing the Right Dog for the Job

The job of a hearing assistance dog is to alert his owner to sounds. "It's a very basic pattern," says John Drach, training director for Dogs for the Deaf. "Say the person is sitting at their desk and someone knocks at the door. The dog goes and checks that there's someone there, comes back and makes physical contact [with the owner], and leads them back to the source of sound."

To the owner, this can be life changing, but it works well because to the dog it's fun. 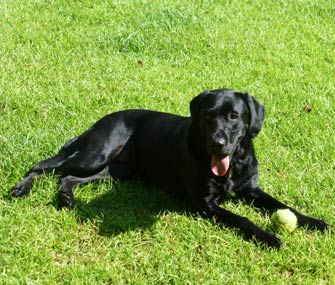 Chris Goodier
Dogs for the Deaf's training director says energetic dogs like Raylene make the best hearing assistance dogs, since they're more likely to show an active interest in sounds.

"We need a dog that's got a little bit more energy," Drach says. "At 3 o'clock in the morning when the smoke alarm goes off, I want that dog to get up and be active, not be laid-back and say, 'You get it.'"

When Drach goes to a shelter to find a dog to train, some of what he's looking for is obvious. "When I approach the kennel, are they willing to interact with me?" he says. "I want them to be interested in me but confident to look around the room, interested in food and treats and toys, and good with people."

Then the trainer will do some basic testing to see how the dog reacts to sounds. Obviously you don't want a dog who reacts with fear or ignores noises, but Kathy Foreman, director of client relations and training for Dogs for Deaf and Disabled Americans (National Education for Assistance Dog Services, or NEADS), says there's more to it — they need to show an active interest. She'll set off an alarm clock when the dog isn't looking and see how he reacts.

"Will the dog stop what it's doing and investigate? 'What's that sound? I better go see what it is.' It's like a dog that, as soon as you get a ball, it wants to play ball. This dog is like that for sounds," she says. "That's your best candidate, because the training is building on that."

They need that intrinsic motivation, because the client will have no way to know if the dog ignores a noise. "It's a type of assistance dog work where no one is giving the dog a command," she says. "No matter what the dog is doing — sleeping, eating, playing — it has to stop what it's doing and work the sound on its own."

Why Breed Doesn't Matter but Temperament Does


A service dog for a someone in a wheelchair or a guide dog needs to be a minimum size to do certain physical tasks, but a hearing dog simply needs to be able to make contact with his owner to alert her, so small dogs like Pugs and terrier mixes are able to do the job as well as a bigger breed. "If it's a larger dog, they bump with the nose," Drach says. "Smaller dogs jump up and use two front feet to touch [their owners]."

Both organizations also use some purposely bred dogs (including Labs like Raylene, but other breeds as well). In fact, they say that the good news and bad news is that there are fewer shelter dogs for them to choose from than there once were, now that spay-neuter campaigns have successfully reduced shelter populations in many places. Raylene was actually bred as a guide dog, but she had a career change when it was discovered she has a slight vision problem. But these dogs need to have the right reaction to sounds as well — and also the right temperament, Foreman says, because they are going to be doing a very different job.

"With a service dog temperament, if you say sit-stay, it shouldn't move if a hurricane goes through the room. They're waiting to be commanded," she says. "If you say sit-stay to a hearing dog and it hears a smoke alarm, it should say, 'The heck with that command. I'm working that sound.'"

You can see these different temperaments even within a litter of puppies, Foreman says, and they're clear enough that they can be tracked into the appropriate jobs early on. "If you train them and you say, 'Jump,' the service dog says, 'How high?' The hearing dog says, 'Why? Why do you want me to jump?'" 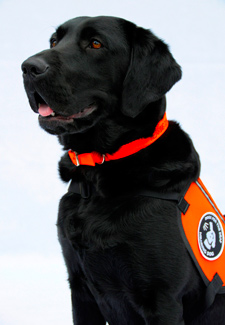 Training Both Dog and Owner


The length of the training process is four to nine months, depending on the dog and the organization, and it's all positive with toys and treats. "It has to be 'This is the greatest game we can play together!'" Foreman says. There's also an initial training period for the owner in the home.

Raylene knows to alert to household sounds such as the microwave, oven timer, phone, doorbell and smoke detector, as well as when Goodier's husband calls her name. The dog lets Goodier know about these sounds by touching her with what they call the 'tap.' They practice all of the sounds at least weekly. "Keeping up her training is part of our daily routine," Goodier says. "I know new sounds will enter our lives from time to time and was taught by Dogs for the Deaf how to introduce them, step by step."

In fact, like many hearing dogs, Raylene has already learned new sounds she hasn't been taught. "Soon after arriving, Raylene decided on her own to alert me to the buzz of the clothes dryer and continues to do that useful work every week," Goodier says. "No longer are my clothes left wrinkled because I've forgotten they're in there!"


Hearing dogs have legal access to all public places, so they're also trained to have good manners in public, such as controlled leash walking and not greeting people or dogs unless given permission. They help their owners outside the home in both obvious and less obvious ways. "When we are in public, she demonstrates by her body language where sound and movement is coming from. For example, if I'm unaware I've dropped my keys, a box is falling over, or a truck is backing up behind me," Goodier says. "And, of course, she wears an orange DFD (Dogs for the Deaf) jacket, providing a visible symbol of my disability."

This indication of an invisible disability is important for many reasons — so people don't think the deaf person is rudely ignoring them, for instance, and as a sign that the deaf person may need help in a certain situation, like that time Goodier couldn't hear critical announcements in the airport.

Some dogs who begin training as hearing assistance dogs end up not right for the job and are adopted out, and though those pups are carefully placed in the right homes from a long waiting list, it sounds like the lucky ones are those who stay in the program, because these dogs seem to truly love their work.

"Raylene definitely enjoys her job! Along with her 'tap,' she often gives me a toss of the head, as if to say, "Come on, let's go!" Goodier says.

And Freeman says that's how they all seem to feel. "It's not work," she says. "It's a game I play with my person that we love to play together."

For more information visit Dogs for the Deaf and NEADS.