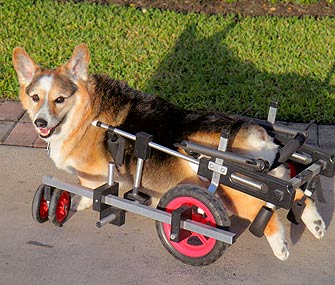 Baseball’s pitchers and catchers reported for spring training in February, and the American love affair with our national pastime began anew this spring. But a new season brings a time for reflection on seasons past, and for many, that conjures up memories of some of the game’s most iconic players. Lou Gehrig is considered one of the greatest players the sport has ever seen, but his name is more frequently linked to one of its saddest chapters: Gehrig's brilliant career was tragically cut short by the debilitating neurological disease amyotrophic lateral sclerosis (ALS), more commonly known as Lou Gehrig’s disease.

Now, thanks to creative researchers and pet dogs, scientists are studying a genetically related canine disease, degenerative myelopathy (DM), to help advance medical knowledge and pioneer treatments for both disorders.

The basis for the study of canine degenerative myelopathy as a model for human ALS research began 14,000 years ago with the domestication of the dog. Fast-forward to Victorian times when selective breeding created the modern breeds we know today. Each of these “purebreds” was developed for a specific function: herding sheep, retrieving game or controlling vermin. While selective breeding practices propagated desirable traits such as intelligence, tenacity and waterproof coats, “bad” genes predisposing dogs to disease tagged along with the good ones, leading to some of the breed-linked diseases that we see and study today.

Veterinarians initially believed degenerative myelopathy was a disease limited to the German Shepherd breed and that it only affected the hind limbs. Additional research, however, has shown that this disease also affects such diverse breeds as the sturdy Boxer,the low-slung Pembroke Welsh Corgi, the fearless Rhodesian Ridgeback and the waterproof Chesapeake Bay Retriever.

Everyone has probably seen a dog affected by degenerative myelopathy in the dog park or on the street. Dogs with DM drag their back paws and wobble in the hind end but are otherwise pain free and enjoy playtime with their human companions.

As with ALS, a diagnosis of DM is heartbreaking for the patient’s family. Degenerative myelopathy strikes dogs in the prime of life and progresses rapidly. Most dogs become paraplegic within a year of onset of clinical signs. Small dogs who are more easily cared for after they lose hind limb function will continue to deteriorate until, similar to ALS patients, they become quadriplegic. Relentless progression of the disease robs dogs of the ability to control their bowels and bladder and, in severely affected dogs, the ability to swallow or bark.

In 2004, the final piece of the puzzle that helped sniff out the root cause of degenerative myelopathy fell into place with the sequencing of the canine genome.

Coupled with extensive canine family trees maintained by purebred dog enthusiasts such as the American Kennel Club, the canine genome can now be analyzed for clues to the cause of — and potential new treatments for — degenerative myelopathy and related disorders like ALS.