Home ›
Our Pet Experts ›
"Duel for the Crown": The Story of Horse Racing's Greatest Rivalry

"Duel for the Crown": The Story of Horse Racing's Greatest Rivalry 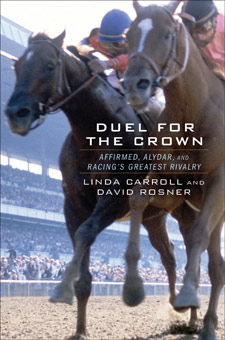 As the first Saturday in May approaches, racing fans prepare for the Kentucky Derby, anticipating the potential emergence of a new Triple Crown champion. But that elusive prize has remained unclaimed for more than 35 years.

In their new book, "Duel for the Crown: Affirmed, Alydar and Racing’s Greatest Rivalry," Linda Carroll and David Rosner look back to 1978, when Affirmed became the last horse to win the Triple Crown, and trace the remarkable and historic competition between the two colts. Alydar was the well-bred star of Kentucky's storied Calumet Farm; Affirmed, by contrast, was the product of an upstart Florida stable. When the horses met on the track, it was more than a contest of bloodlines and talent: It was old money against new, genteel tradition against modern ambition.

The Story Behind the Rivalry

According to Carroll and Rosner, great horses and Triple Crown champions seemed to roll off an equine assembly line in the '70s: Secretariat captured the title in 1973, followed by Seattle Slew in 1977 and Affirmed in 1978. But the rivalry between Affirmed and Alydar is still considered to be one of the greatest racing stories of all time.

Throughout the 1978 spring classic races, Affirmed was regarded as the underdog because of Alydar’s pedigree, his Bluegrass connections and his impressive talent. But in race after race, Affirmed proved that he was a true champion. Carroll and Rosner emphasize Affirmed’s almost complete refusal to let any other horse get a nose in front of him, especially Alydar, and bring both horses to life on the page through their descriptions of the colts' competitive natures. Alydar’s supporters have often said that if not for Affirmed, their horse would have been that year’s Triple Crown winner. But it is just as likely that without a well-matched rival, neither colt would have become the great racehorse that he was. Carroll and Rosner's retelling of this story both confirms Affirmed’s champion status and fosters a deep respect for his brilliant rival. 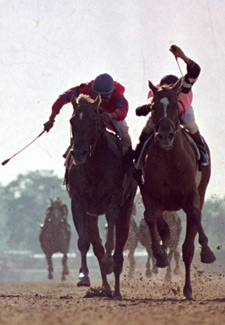 "Duel for the Crown" doesn't just focus on the horses; the authors follow all the various stories that culminate in the rivalry between Alydar and Affirmed. Among the most interesting of these narratives are those of the jockeys who rode the horses. The rise of teenage phenom Steve Cauthen, the 18-year-old who rode Affirmed to victory in the Triple Crown, is an essential component of the story, and the authors tell it in engaging detail.

Carroll and Rosner's story is, in the end, a nostalgic look back at a racing industry that no longer exists. The essential character of American racing has changed dramatically in the three and a half decades since the two famous colts dueled down the backstretch at Belmont. The focus in racing has increasingly shifted from the finish line to the bottom line; racing is no longer viewed as a game and a passion but merely a business. Today, horses are bred not for durability at the track but with an eye to recouping big investments in the yearling sales ring.

And that may be why we haven’t had a Triple Crown winner since 1978 and why we may not see one this year. But "Duel for the Crown" will remind die-hard racing fans why they love the sport and why they continue to hope every spring that they will once again be witness to the kind of greatness embodied by Thoroughbred champions like Affirmed and Alydar.

"Duel for the Crown: Affirmed, Alydar and Racing’s Greatest Rivalry," by Linda Carroll and David Rosner, $26 at Amazon.com