Enrich Your Pet's Life With Lessons From the Zoo 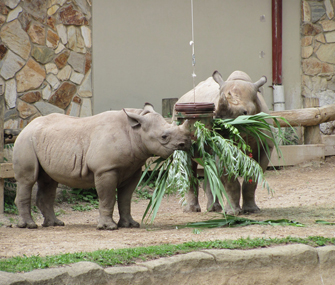 Photo courtesy of Cleveland Metroparks Zoo
Animals are given food and "toys" designed to elicit their natural behaviors.

Zoos are a lot different now from the old days when bored animals paced around bare cages. A lot of that is due to what's called enrichment, and there's a lot pet owners can learn from what zoos do.

"We provide enrichment to our animals every day," says Tad Schoffner of Cleveland Metroparks Zoo. "We want to evoke natural behaviors from our animals, so we need to determine what those behaviors are. What do wild animals do in the wild? What takes up their day?"

One answer to that question is that a big part of an animal's day is taken up finding food. Schoffner saw this when the gorillas' diet was changed from one based around a biscuit-type food to a more natural one that is mostly greens.

So one thing keepers do is figure out how to present food to make mealtime take longer. Spreading food around the exhibit or putting it inside an object provides mental stimulation — figuring out how to find it or get at it — and prompts more physical activity than eating out of a bowl.

Feeding is closely tied to another aspect of enrichment: Exhibit design should also allow for natural behaviors. "We have older bear exhibits that were originally made with all concrete. We did renovations to create dirt pockets so we can bury things for them," he says. "Bears have such a keen sense of smell that they'll smell food buried six inches or a foot down."

But food-seeking isn't the only natural activity keepers try to encourage. Apes, for example, build a nest every night to sleep in. "We provide materials for them to create a nest every night — everything from burlap to straw to cardboard. It's a very natural behavior for all the great apes."

As zookeepers have learned, the animals don't care if something looks natural, as long as it serves the purpose. Burlap for a nest or a meal dug out of a cardboard box engages their natural instincts, and that matters more than specifically replicating the appearance of the wild.