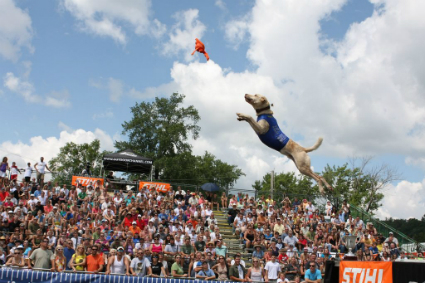 DockDogs.com
A dog competes in a Big Air event, leaping across a pool in pursuit of a tossed toy.

Fill a 40-foot pool with 30,000 gallons of water. Assemble a crowd of dog enthusiasts. Then unleash a pack of pups who live to soar and make a splash.

Welcome to the fast-growing canine sport of dock diving.

Depending on the organization, it answers to the following names: DockDogs, Splash Dogs and Ultimate Air Dogs, which was started by former Detroit Tigers pitcher Milt Wilcox. Regardless of what it's called, the sport features canine athletes of all ages, sizes and breeds who jump for distance or height from a dock into a deep pool.

Splash Dogs founder Tony Reed first witnessed the sport in 2002. On a lark, he entered Sierra, his black Labrador Retriever, into an event. Sierra immediately took a liking to dock diving and now owns a personal best distance leap of 20 feet.

Reed is most impressed that his ageless athlete surpassed 15 feet — after celebrating her ninth birthday. “I guess you could call her the Betty White of Splash Dogs,” he says. “But she is a great example of how this is a sport for dogs of any age who love to retrieve, love water and have a toy drive.”

DockDogs CEO Grant Reeves has already devoted his career to orchestrating live events, but after adopting a pair of Golden Retriever puppies named Caesar and Clancy, and seeing how much joy the duo exhibited in dock diving, he's all about making the canine sport the best — and biggest — it can be.

“The appeal is global,” Reeves says. “We host events in the United States, Canada, Australia and the United Kingdom, and more countries are clamoring to come onboard. Everywhere there is a competition, the crowd is always fired up. We just have one rule: Never take the fun out of this by making it a job for your dog.”

What Exactly Is Dock Diving?

Big Air is the original dock competition. The rules are simple: You have 90 seconds to get your dog to sprint down the dock and go airborne, just like an Olympic long jumper. Top honors are bestowed upon the canine with the best vertical jump. The flight distance is measured based on where his back legs splash in the pool, so smart dogs who learn to tuck in their hind legs before landing are at an advantage. 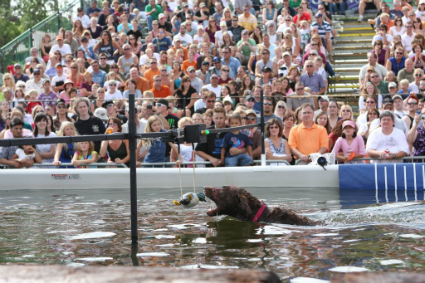 DockDogs.com
A dog competes in a Speed Retrieve event, which attracts strong and speedy swimmers.

Speed Retrieve is best suited for dogs who love to swim powerfully and quickly. A pup must paddle the length of the pool to retrieve a mounted object at the other end. The canine who does this fastest is champ.

Extreme Vertical attracts dogs who delight in soaring high. For this competition, a competitor sprints down 20 feet of dock before leaping skyward to grab onto a device called a bumper that's mounted to a circus acrobat-like swing bar. In each round, the bumper is raised by two inches until there’s a clear winner.

Sports enthusiasts constantly clamor for ultimate champions. That’s why the NFL has the Super Bowl and baseball has the World Series. In dock diving, the competitor with the highest combined score in Big Air, Extreme Vertical and Speed Retrieve is crowned Iron Dog.