Fear Free Tips for Picking Up and Holding a Cat 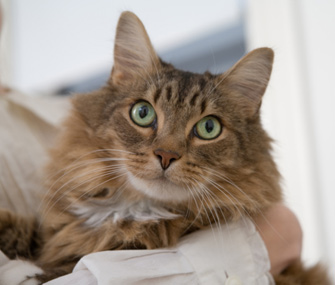 Thinkstock
Saying a word like "hold" before you pick up your cat lets her anticipate what's going to happen.

Some cats can panic when held if they feel unsafe or threatened. And holding a feline who may have herclaws and teeth engaged as she struggles to break free can beanunsettling experience for both of you.


There's plenty for a cat to be concerned about. For starters, being held can takeaway a cat’s ability to escape. In the veterinary hospital or at the grooming facility, a cat may feel uncomfortable and threatened when held in place to be physically manipulated. Or when picked up and carried, the feline may panic out of anticipation of where she's being taken to, like the crate.

And many times when a cat is carried, she lacks grip, balance and proper orientation to the ground, creating a situation where the cat may feel at risk of falling. And, no, cats don’t always land on their feet. In fact, when held at a lower height to the ground in a person’s arms, a cat can have greater difficulty righting herself in the air than she does when she has more height and therefore time to twist and land correctly should she fall.


You may not have a cuddly cat who wants to be held all the time. But with use of the following handling tactics, most cats can transition from scared to serene when picked up.