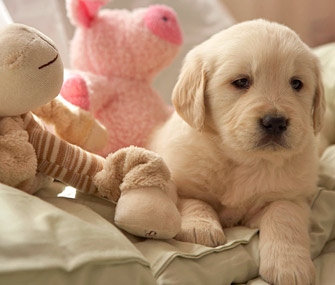 Having a well-mannered dog begins with laying a firm foundation for good manners during puppyhood. Ideally, puppies should be brought home at around 8 weeks of age. As soon as the puppy is taken to his new home, training should begin. Although potty training and destructive chewing are commonly addressed puppy behaviors, these five often-neglected training tips should also be used with your puppy right from the start to create a well-behaved adult dog.

1. Prevent jumping up from the beginning.

It’s hard to resist a puppy jumping up to deliver kisses, but it’s important to establish a "no jumping up to greet" rule from the start. Rather than coddling and hugging a puppy when he jumps up, simply ignore him until he has all four feet on the ground. If he knows from the very beginning that jumping up never earns attention, he will be less likely to thrust his paws on you as an adult. For the same reason, whatever you don’t want your dog to do as a full-grown adult, such as jumping on the bed, don’t allow it as a puppy.

2. Start loose-leash walking as a pup.

Although it’s easy to control an 8-pound puppy pulling on the end of a leash, it’s going to be far less cute and much more challenging when the 8-pound puppy turns into an 80-pound dog who pulls you around like a Malamute charging forward with sleigh in tow. Begin loose-leash training by allowing your puppy to only move forward when the leash has slack. As soon as the leash tightens, stop in place and wait for slack before moving forward again, which teaches your puppy that only loose leashes allow for moving forward and a tight leash hinders his progress.

One of the most important lessons you can teach your puppy is to readily accept your coming near his food, chew items, toys and resting places. Teach your puppy that your presence around these valued items actually means something good will be given to him. Unfortunately, the common misconception about resource guarding prevention is that your dog should naturally allow you to put your hand in his food and take away his chews without being rewarded. When owners intrude on a dog's space or toys without giving a reward, they actually teach the dog to be defensive, and he will likely growl and possibly bite in these situations as time goes on. Rather than making your dog feel threatened or that his space is invaded, teach your puppy that when you come near these valued items, something positive will happen. Toss treats in your puppy’s food bowl or on his resting area when you walk by. If you take any item away from the dog, either give him something more valuable to replace it, or give him an added treat and then return the original item so he understands that you always provide him with something even better in return for letting you near his things.

4. Give your puppy time alone.

When a new puppy comes into the home, he is lavished with affection from doting family and friends. Most puppies revel in all the attention and have no inkling that everyday life won’t always be as filled with admirers. It’s easy to spend hours on end with something new and exciting, especially an adorable puppy, but as the dog grows up, it’s going to be difficult to devote as much time as you did in the beginning. Prepare your puppy for the future by giving him regular intervals of separation from people and other pets. Crating or putting the puppy in an exercise pen for a couple of hours during the day will help him learn that alone time is a part of life, and it will lessen his anxiety over separation in the future. Help your puppy to associate alone time with something positive by giving him a stuffed Kong or other food puzzle when he's alone.

5. Be careful what tricks you teach first.

Whichever trick a dog learns first in training is often the behavior he will revert back to when he is confused or frustrated. Because of this, I like to teach sit and down first as foundation behaviors. Both are equally acceptable as a default behavior for a dog to resort to. Tricks you may want to avoid teaching first would be spin, jump, bark and shake — that is, unless you can tolerate your dog doing these behaviors whenever he is stressed.