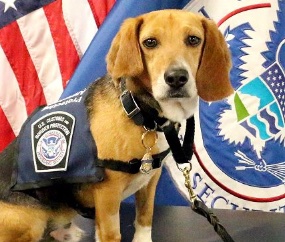 Twitter / U.S. Customs and Border Protection
After living through abuse, Murray is now an officer with the Beagle Brigade.

At 3 years old, Murray has been through a lot. After an Atlanta area shelter saved him from abuse and neglect, he was adopted by the USDA’s Animal and Plant Health Inspection Service and trained to join their Beagle Brigade. Officer Murray started his new job with the U.S. Customs and Border Protection team at the Hartsfield-Jackson Atlanta International Airport on Monday. He uses his expert nose to sniff baggage for invasive pests and diseases. “Murray will get a treat after, and that is what he lives for,” said Abbey Powell, whose group trained him. “The dogs see it as fun. They don’t see it as work. It’s a blast for them.” — Read it from Inside Edition via Yahoo