From Crates to Kongs: Five Dog Products That Changed the World 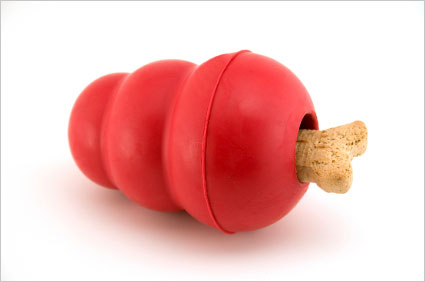 iStockphoto
The Kong, a virtually indestructible chew toy that is stuffed with pet food and treats, is still a star after 35 years.

Today there are thousands upon thousands of pet care products on the market, with more being introduced all the time. Nevertheless, there are a few that I think have really changed the way we care for, train and interact with our dogs. With the benefit of 30 years as a nationally syndicated writer specializing in pet care, I've chosen my top five.

Shipping crates for animals have been around forever. I once found an aluminum one that still had steamship and railroad tags on it at a garage sale. But the original Vari Kennel line of high-impact plastic crates by the Petmate company altered forever the way we raise and train our dogs. Most notably, crates are now used routinely for housebreaking, working with a puppy’s natural desire to keep the area around him clean to help him learn to “hold it” until he can be taken outside and praised for going in the right place.

But that’s not all. Crate training helps teach growing puppies which items are OK for chewing and which are off limits, based on what’s inside the crate and what’s not. A crate also provides a safe place for a dog to ride in a vehicle, teaches him to be more relaxed when confined at the veterinarian’s and even provides him a safe, secure place to be when evacuated during a disaster.

Oh, and crates are also good for shipping pets. In fact, I give honorable mention to the soft-sided carriers first popularized by Sherpa, which allow small dogs (and cats) to be comfortably taken into the passenger compartments of airplanes.

An homage to the Michelin Man and formed from durable rubber, the Kong is arguably the best dog toy ever invented. Joe Markham still owns the company he founded 35 years ago and can still be found talking about his invention at pet care trade shows. The story goes that his dog Fritz, a German Shepherd, went through chew toys like Lady Gaga goes through shoes until Markham tossed his dog a rubber suspension part from a Volkswagen he was working on. Markham immediately saw the potential, and the Kong was born.

Kongs now come in a wide range of sizes and chew strengths. But it’s the hollow center of most Kongs (the floatable Kool Kongs are the exception) that gives this toy superstar status.

Dog trainers recommend keeping crated dogs busy with Kongs stuffed with a variety of fillings, such as kibble, cheese, peanut butter and rawhide sticks. Kong stuffing has become an art, with several websites dedicated to the practice. And there’s no telling how many happy dogs have been distracted from destruction by King Kong.

Early dog collars were made of metal to protect the necks of war dogs; later ones were made of leather to identify owners and allow for controlling animals with leashes or keeping them from roaming with chains. A few lucky dogs were treated to the most stylish of neck apparel by wealthy owners, as displayed in the quirky Dog Collar Museum at Leed’s Castle outside of London. But fashionable collars weren't available for the ordinary dog until the invention of the snap-together clasp.

Snap-together collars of nylon and other colorful synthetic materials are now so popular that finding an old-fashioned leather collar with a buckle isn’t so easy anymore. The new materials make for an endless array of collars, including those with a dog’s name and owner's phone number worked into the design, those celebrating sports teams or other causes, or those that are just plain fun. The plastic snaps also help make collars so affordable that many dogs have more than one, and not a few have collars for every occasion.

I throw like a girl. But even if I didn’t, I know that no one with the possible exception of a Major League outfielder could throw a ball far enough to keep my two Retrievers happy. Since I like my Retrievers to be happy — not to mention exhausted, so they don’t drive me crazy! — I own a Chuckit. Actually, I own three. Maybe four. Simply put: I can’t live without them.

Seemingly based on the cesta used to fling the pelota in jai alai, the Chuckit gives even the wimpiest dog owner a rocket launcher for an arm. With little effort you can fling to the point of your dog’s happy exhaustion without working up a sweat yourself.

Legendary veterinary behaviorist Dr. R.K. Anderson had a simple idea: Why wouldn’t something that has worked with horses for countless years control a dog just as painlessly? A few prototypes later, the head halter was born. Today, you can find them anywhere there are dogs. Head halters for dogs are simply modified versions of horse halters, and they work on the same principal: Guide and control where the head goes and the rest of the body will follow.

How many shoulder joints has the head halter saved? Hard to say, but the ability to take an unruly dog for a walk benefits both pet and owner, helping lessen behavior problems caused by inactivity and health problems caused by excess weight.

Now it's your turn. What pet accessories do you nominate to the Hall of Fame? What products can't you live without? Tell us in the comments below.