Home ›
Our Pet Experts ›
Caroline Golon ›
From Wild Cat to Grumpy Cat: a Short History of Our Fascination With Felines

From Wild Cat to Grumpy Cat: a Short History of Our Fascination With Felines 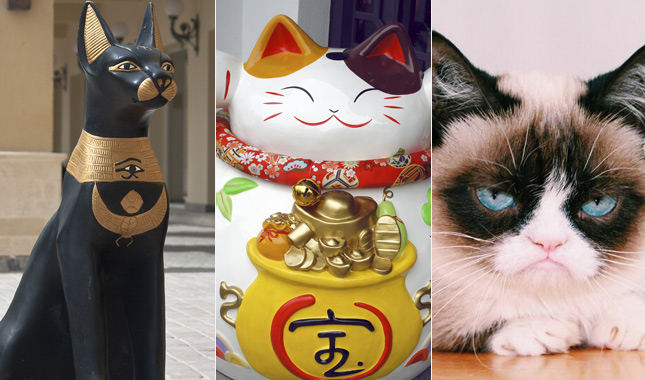 Whether or not you’re a cat lover, there’s no denying that cats rule the Internet. We can’t get enough of cat memes, tweeting cats and cats with Instagram accounts. We’re obsessed with Grumpy Cat, Hamilton the Hipster Cat, Lil Bub and others. Cat videos rack up millions of views, and there are entire film festivals (yes, plural) devoted to cat videos.

So why this modern fascination with cats?

Actually, it’s not so modern. Consider cats throughout history, and it’s clear that we’ve always been obsessed with the feline kind.

For many years, researchers believed that cats first cuddled up to humans in ancient Egypt, an assumption based largely on the frequent appearance of cats in Egyptian art and the discovery of carefully mummified cats in both human and feline graves.


But it turns out that the Egyptians were not the first to cohabitate with cats: A 2009 article in Scientific American titled The Taming of the Cat reported that archeologists digging on the Mediterranean island of Cyprus in 2004 came across cat bones in a 9,500-year-old burial site. Scientists found a complete cat skeleton, positioned in a grave next to the bones of a human, suggesting that the cat was tame and had been buried with its owner. And, because wild cats are not indigenous to the island, scientists have concluded that the cats accompanied humans when they settled there.

Cyprus is in the area known as the Fertile Crescent (which includes Mesopotamia, the land in and around the Tigris and Euphrates rivers). At this time in history, humans had evolved from hunters and gatherers into an agricultural society. This created plenty of feed stores in which cats would find lots of rodents. According to Scientific American, scientists believe this may have been the reason wild cats came out of the woods and began spending time closer to humans.

And even scientists believe it was the cats—not the humans—who came up with the idea to live together.

“We think what happened is that cats sort of domesticated themselves,” says Carlos Driscoll, a University of Oxford graduate student and one of the authors of a recent study published in Science Magazine that mapped the DNA of wild cats and domestic cats throughout the world to determine the origin and evolution of today’s house cat.

The relationship between cats and humans wasn’t developing only in the Fertile Crescent, though. According to 2013 Science Magazine article When Cats Became Comrades, scientists found more evidence that cats and humans were cohabitating across the world earlier than previously believed: In a 5,000-year-old Chinese farming village, archeologists unearthed feline bones among other artifacts and, upon analysis, discovered there had been an unusually high amount of grain in one cat’s diet. Since cats are primarily meat eaters, this suggested the cat was tame enough for humans to feed it, which seems to be a sure sign the cats were living among humans. And, writes J. Wastlhuber in History of Domestic Cats and Cat Breeds, by 1000 B.C., cats in Egypt were fully domesticated.

The Cult of Cats

The Internet may have changed the way we express our devotion to our cats, but the notion of idealizing them visually is centuries old. Egyptian artifacts and burial sites paint the most robust picture of a society that loved and appreciated felines — quite literally. In The Elegance of the Cat: an Illustrated History, writer Tamsin Pickeral points out that as many as 4,000 years ago, cats were frequent subjects in Egyptian art and tombs. The works depicted cats both as hunting in the marshes and also lying beneath chairs, indicating domestication.

And though Internet celebrity may seem like a new twist in the history of cats, our age isn't the first to revere felines: Egyptian cats gradually went from being beloved pets to semisacred animals dedicated to Bastet, a protective female goddess with the body of a woman and the head of a cat. The Bastet-worshiping “cult of the cat,” says author Helen Strudwick in The Encyclopedia of Ancient Egypt, reached its height around 950 B.C. Bastet’s festival was one of the more important and celebrated events in Egypt. Bastet became so much a part of Egyptian society that images of cats appeared everywhere, incorporated into paintings, statues and jewelry, and appearing on household items like pots and jars.


But it was not just images of cats that were important to the Egyptians: Strudwick describes how a person seeking the favor of Bastet could purchase a sacred cat from the priests of Bastet, who raised cats for this purpose. The cat was killed (usually by quickly breaking its neck), mummified and placed in a special underground cemetery for cats. The idea was that the cat would find Bastet upon its arrival in the afterlife and pass along a message from the human. According to Dr. Bruce Fogle in The New Encyclopedia of the Cat, archeologists have discovered several of these underground cemeteries, including one at the temple of Bastet at Beni Hasan, Egypt, which held more than 300,000 mummified cats.