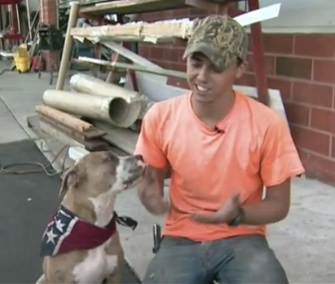 WIAT
Corona was pulled from a mineshaft by Michael Shoepf and his friends, after they found her while off-roading.

Rescuers are searching for the owner of a sweet 1-year-old Pit Bull who was found trapped in a mineshaft in Corona, California. Michael Shoepf and his friends were off-roading Friday night when they took a turn and saw two eyes looking up at them. The dog, who they named Corona, had fallen into a deep mineshaft. “Just instantly I was like dude, we can’t leave,” said Schoepf. They gathered any rope they could find from their trucks and lowered Schoepf into the narrow space, then pulled him back up with the dog. The group then brought the dog to a veterinarian for help. She suffered a few scratches and an injury to her eye that the vet says will heal. Although Corona does have a microchip, there wasn’t much identifying information associated with it. She clearly loves Schoepf, but he already has two dogs. He’s hopeful her owner will come forward, and if not, he’ll be looking for a good home for his new buddy. — Read more at Alabama’s WIAT