Grieving Meeko: Getting Through Pet Loss Day by Day 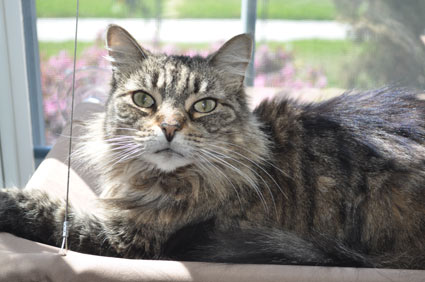 Meeko wasn't my cat. Not really, anyway. She belonged to my husband, Jared, when we first met 12 years ago. She was a big, fluffy, 3-year old kitty, with a tail striped like a raccoon and beautiful markings all over her face. I adored her. She was less certain about me.

Eventually, of course, I won her over by feeding her treats and tossing crinkly objects her way for playtime. When my husband began traveling for work, our bond strengthened — I was still second choice, of course, but a close second.

Near the end of 2010, Meeko changed. She lost weight despite continuing to eat well, and became extra playful, which was strange, given that she was considered senior at that point. We soon learned the cause — hyperthyroidism. In addition to that, testing her BUN and creatinine levels showed that our poor girl was in renal failure. Basically, we knew at that point that we were on borrowed time.

For a year we tricked her into taking pills twice a day (thank goodness for soft treats to hide small pills in!), gave her subcutaneous fluids several times a week, and fed her the food our vet prescribed. For a year we tried to prepare ourselves, and sometimes — when she'd have a particularly feisty day filled with rolling in sunbeams and knocking various items off my desk while I worked — we'd even trick ourselves into believing she was doing really well. But by the start of 2012, it became clear. She'd lost so much weight and had very little energy. The time had come to end the battle.

You'd think that having so much time to prepare would make it easier to handle the inevitable. In some ways, you'd be right. We knew we'd truly done all we could for her. We'd had time to come to terms with the decision itself. But you'd be wrong if you think that made it much easier to lose her.

My husband and I got up early to spend all the time with her we could. We alternated between cherishing those few hours and finding every moment agonizing, knowing that in three hours, two hours, 30 minutes, she would no longer be with us. We fed her all the foods she hadn't been allowed to have and watched her chow down on tuna and other juicy, canned delicacies. We gave her catnip. We placed her in sunbeams. And then we wrapped her in a blanket and took her to the vet, where my husband cradled her as they shaved her front leg, put in a catheter, gave her a strong sedative and, finally, an injection that stopped her heart. He held Meeko, and I held him, and we stroked her head and cried until the vet returned to make sure there was no heartbeat. We took a few more minutes with her, which somehow both felt like hours on end and no time at all, then headed home.

It felt strange, and of course awful, to be home without her, but we found some peace in knowing we'd done the right thing.

Day 3: Not the Happiest Birthday

Three days later it was my birthday, and even though we were still reeling from our loss, we celebrated with friends at a nearby restaurant, where we took over the back patio. However, we soon found out we were not alone — a small, stray cat had joined the gathering. Jared and I locked eyes at one point, and although my eyes welled up, I held back the tears. At least I did until we got home.

I was prepared for the "sightings" at home — every time a shadow would pass just out of sight, I would think it was Meeko, just for a split second. The reminder out of my house, though, was unexpected, and I realized my armor wasn't quite as thick as I thought it was.