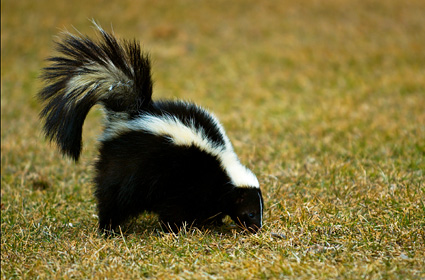 Over the years, the universal skunk remedy has been widely accepted as the canned red stuff in your pantry. However, as reported in the Chicago Tribune several years ago, a chemist by the name of Paul Krebaum discovered what turns out to be the hands-down best solution for eliminating odor on dogs who have been skunked. You can still find the ingredients in your cupboards. And yes, it really works! Here's the odor-blasting formula: Take 1 quart of 3 percent hydrogen peroxide, 1/4 cup of baking soda and 1 teaspoon of liquid hand soap. Mix and immediately apply to the stinky pet. Then rinse thoroughly with tap water. For a big dog, such as a Labrador, you may need to double the recipe to improve coverage. Common sense dictates keeping the mix out of sensitive areas like the eyes and ears. Also, don't allow your dog to ingest the mixture, because hydrogen peroxide can cause vomiting.

Obviously, no one wants to take the time to run to the store when you have a stinky dog, so buy the ingredients now and keep them on hand if you are likely to have a skunked dog situation! But remember — don't mix them until seconds before application.