Home ›
Our Pet Experts ›
Amy Sinatra Ayres ›
Has Hollywood Come Up With a Better Way to Film Animals?

Has Hollywood Come Up With a Better Way to Film Animals? 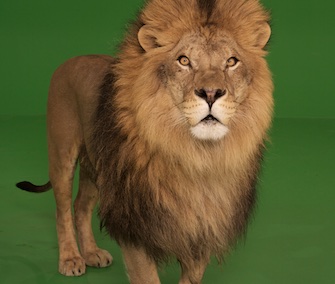 When director David Fincher needed footage of a deer and a raccoon for the opening montage of his recent hit movie,Gone Girl, he didn’t bring animals onto the bustling movie set.

Instead, they were filmed in a more low-key environment by GreenScreen Animals and later digitally placed in the right setting.

With the pressure of producing a big-budget movie, sets can be stressful places for even the most well-trained animal actors. Now, a growing number of animals are being filmedin front of a green-colored screen that allows an editor to replace the background with whatever he would like. Green screens have historically been used during television weather forecasts, allowing a meteorologist to appear to be standing in front of a large map. But they are now commonly used for high-tech special effects as well.GreenScreen Animals, co-owned by Mark Shockley and Westley Koenen, is one of the Los Angeles-based production companies that specializes in this option for filming animals.

While the shoot for Gone Girlwas a custom production, most of the company's work involves creating stock video of a wide assortment of animals that directors can consider and adapt to their storylines.

GreenScreen Animals has been in business since 2008, and its work has appeared in the trailer for the movie We Bought a Zoo; on shows such asThe Tonight ShowandJimmy Kimmel Live; and in music videos, including Katy Perry’s “Roar.”

“For the user who buys the clip, it’s quicker, it’s easier, it’s cheaper,” than hiring an animal trainer and bringing animals on set, Shockley says. It can also be safer for the animals, he believes, and it helps take the pressure off of them.“Generally speaking, I feel like the industry folks are pretty responsible and aware [of the stress that can be put on an animal],” he says. "But animals are extremely unpredictable, and sometimes they’re just not feeling it.”

Of course, working with green screens does not always fit the bill. "There are certain things that we can’t do that trainers can do, so I don’t want to step on their toes,” Shockley says. “All the stuff that we do, the animals aren’t interacting [with people].”

GreenScreen Animals works closely with the American Humane Association, which is the film and television industry’s officially sanctioned animal-monitoring program and grantor of the “No Animals Were Harmed” disclaimer. American Humane representatives work on sets to ensure animal safety.

“If people aren’t accustomed to working with animals, I don’t think they know the limitations,” explains Karen Rosa, a senior adviser in American Humane’s film and television unit. “Although [most filmmakers are] well-meaning, they don’t understand that the trainers make it look so easy. We have to tell the people, 'No, this is a dog; this is not a human actor.' ”