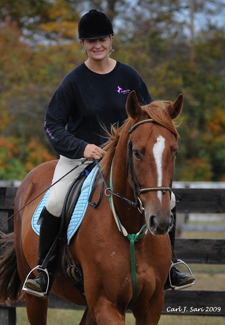 Carl Sari
Saintly Sir, one of the ex-racehorses currently available for adoption, is ridden by a ReRun volunteer.

Thoroughbred racehorses, for the most part, enjoy a pampered and carefully managed lifestyle. Treated like the equine version of rock stars or sports heroes, world-class athletes are cared for by an entourage that would make Kanye West jealous. They eat the best food, wear designer clothes, and are often chauffeured to races in the finest of equine motor coaches.

It can be a near ideal existence for a promising young star in training. But what happens if a horse is a just little too slow to win at the track? What does the future hold if he gets old or injured?

The truth is, unless a Thoroughbred has won big races, like the Kentucky Derby or this weekend’s Belmont Stakes, or is destined for a career in the breeding shed, his post-competition fate can be uncertain. The sad reality is that when their racing days are over, many unwanted horses wind up dumped at auctions or with dealers, destined for the proverbial glue factory unless they catch some kind person's eye.

ReRun to the Rescue

That’s where groups like ReRun, Inc., come in. A charitable organization devoted to rescuing, rehabilitating and retraining racehorses for adoption, ReRun is headquartered in New Jersey but has chapters in four other states, including New York State where the Belmont is run. It is one of the largest of the many rescues that are dedicated to helping racehorses make the transition from trackside to trail rides, and its small army of volunteers is devoted to the cause.

For longtime volunteer Eliza Scheurman, the commitment is personal. “My own horse, Nathan, is an off-the-track Thoroughbred. I’ve had him since I was 13.” He’s 22 now, and still raring to go, although an arthritic ankle keeps his activity level light. “I first got involved with ReRun because I wanted to give other Thoroughbreds a chance to have a home like my own horse has had for the past 17 years.”

Scheurman says Nathan is an excellent example of what a retired racehorse can offer to an adoptive owner: “He’s done everything — hunter shows, some dressage, trail rides. He really is a versatile, all-around horse.” While not for rank beginners, “these horses are phenomenal in the right hands,” says Scheurman.

But how do you turn that fire-breathing racer into a fit companion for the average rider?

It takes a lot of time and patience, says Scheurman, who not too long ago helped retrain Fleet Valid, a graded Stakes winner with career earnings of $380,000. While the process sounds simple — “We assess them for soundness, rehabilitate them, retrain them and find them adoptive homes,” says Laurie Condurso-Lane, Rerun’s program director — the amount of work and money entailed in transitioning each horse from running to riding or to even just pastured “R&R” can be enormous.

Each horse must be assessed as an individual. If the horse has an injury, he might need special care, such as stall rest and medical treatment, before he can be cleared for retraining. Recuperation from racing injuries in some cases can take months or may never occur, in which case a safe, nonriding home has to be found for that horse.

Life in the Slow Lane

One of the biggest hurdles for the animals they take in, says Condurso-Lane, is adjusting to life as a “normal” horse. “These horses are used to being pampered at the track,” she points out. They get bathed, they are bedded in straw, they have their feet done regularly. When they come back to regular farm life, Condurso-Lane says with a laugh, “the daily massages have to stop.” 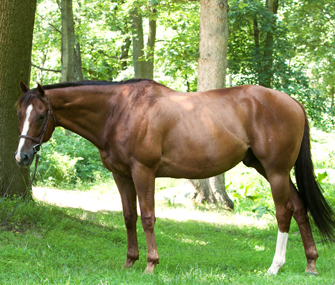 Jenelle Kappe
Fleet Valid, who ran in 28 races before retiring at the age of 8, is one of the horses currently available for adoption from ReRun.

What they get in return, however, is a safe and certain future, and a team of volunteers committed to making that reality happen for their charges. Condurso-Lane relies on six trainers, who are paid with a grant from the ASPCA, and about 50 regular volunteers to help run the organization and work with the horses, who are stabled at private farms throughout the area until they are adopted.

That’s the true date with destiny that both Scheurman and Condurso-Lane are counting on for Fleet Valid. Despite the fact that he was a speed demon at the track, Fleet Valid is actually a pretty mellow fellow to be around. “He’s the sweetest thing in the world,” says Scheurman. Condurso-Lane agrees: “You can drop the reins and fix your ponytail on him.” After several months of rest and retraining, Fleet Valid is ready for adoption to the right home. A bad ankle prevents him from being used for much more than trail riding, but it can still be a thrill for many to have the privilege to sit on a horse that has led such an illustrious racing career. You can find information about Fleet Valid — as well as bios and photos of other horses ReRun has available for adoption — at the group's website.

Over the past 18 years, ReRun has helped rehabilitate and re-home more than 400 racing Thoroughbreds, yet every year there are thousands more that need homes. At any given time, the group may have between 30 and 40 Thoroughbreds available for adoption. For more information on the program, or to find out how you can help, visit www.rerun.org.