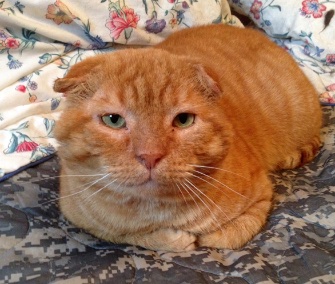 Gepetto loves to curl up comfortably on a queen bed in his new home. But things haven’t always been such for the big orange cat. His rescuers think the tabby spent most of his life on the streets in Baltimore.

That changed recently when a resident in the neighborhood where he hung out noticed that he was scratching his ears raw, according to a news release from Best Friends Animal Society. She called animal control, and Gepetto was taken in by the Baltimore Animal Rescue & Care Shelter (BARCS), where he tested positive for feline immunodeficiency virus, or FIV.

FIV attacks a cat’s immune system, similar to HIV in humans. FIV is contagious among cats, although a cat can go for years without showing signs of illness. It’s primarily transmitted through bites from an infected cat. Male cats roaming outside, like Gepetto, tend to have an increased risk of the untreatable disease because of their tendency to fight other cats. The disease can’t be transmitted to humans. Luckily for Gepetto, several groups stepped in to help him. Once he tested positive, BARCS contacted the Community Cats Project, which is a partnership between Best Friends and PetSmart Charities, and they immediately took him.

An assessment revealed that Gepetto was also suffering from an upper-respiratory infection and had ear mites, which was why he was excessively scratching. He’d scratched so much he’d left his ears stubby and bent over, like a Scottish Fold. His caregivers lovingly referred to him as a "Baltimore Fold."

The Feline Rescue Association started looking for a foster for Gepetto and quickly found the perfect situation for him with Trish Tilson. Tilson specializes in fostering cats with FIV.

“When I saw his photos, I immediately fell in love with him,” she told Best Friends. “I have had two FIV-positive cats and two non-FIV cats living comfortably, happily and healthily together for years.”

FIV is typically not as easily transmissible as FeLV, or feline leukemia virus, which is another untreatable disease in cats. As long as FIV-positive cats aren’t aggressive with the FIV-negative cats in a household, the risk of spreading the disease is relatively low. Although a vaccine is available for FIV-negative cats, it doesn't protect against all strains of the virus. FeLV, on the other hand, can be spread through more casual contact, such as grooming or sharing food bowls. Because FIV isn’t spread as easily, cats with it can be great adoptees, explains Dr. Patty Khuly. She also shares her thoughts what you should know about adopting a cat with FIV.

After years on the street, Gepetto didn’t waste any time adapting to the comforts of home. He’s been indulging in a warm bed to sleep on, a steady source of food and lots of affection.

Tilson has discovered that he has quite the personality. She said he’s a talker and is always looking for someone to give him some love — and some food.

And it seems like Gepetto understands how good he has it now.

“I truly believe some of these cats, especially the older ones, know they have hit the jackpot," Tilson says.