Home ›
Our Pet Experts ›
Mikkel Becker ›
How Can I Keep My Dog From Peeing on My Indoor Plants?

How Can I Keep My Dog From Peeing on My Indoor Plants? 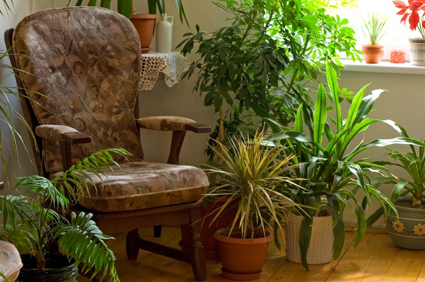 Q: I have some large indoor trees and leafy plants that my dog likes to mark. What can I do to stop this undesirable behavior?

A: Urine marking — which involves the release of small amounts of urine typically on vertical surfaces like walls or poles — is most often seen in male dogs, especially those who have not been neutered. Females will also mark on occasion, particularly if they’re in heat. An animal can begin marking as early as 3 months old.

The problem is that urine marking can be hard to distinguish from a loss of housetraining, and there may be medical reasons behind your dog's behavior. It's difficult to know what the cause is without talking with your vet. The good news is that with your vet's help, you can sort out the cause of the urination and recommend the best steps to help resolve the problem.

As the name implies, urine marking is a way for a dog to mark his territory. The scent of urine from previous incidents and environmental competition from male dogs are the two most common factors that trigger marking, but emotional stress — such as from new people, pets or objects around the home — can also lead to unwanted marking indoors.

Of course, one of the best ways to reduce urine marking is to neuter or spay your dog. In fact, it's a good idea to neuter or spay all the pets in the household, because hormones in other pets (such as when a female is in heat) can trigger marking behavior.

Punishment rarely stops marking; in fact, it usually makes the situation worse by causing emotional stress. Dogs can learn to mark only when it’s “safe,” so punishment teaches the dog to be secretive and mark when his owner isn’t watching, which makes changing the behavior even more difficult. The most effective method of training is to give your dog an alternative activity.For example, if the main trigger is a visitor to your home, break up your dog’s normal routine by offering him an activity that’s incompatible with marking, such as hunting for kibble in the backyard or chewing on a Kong.

Another option is to supervise your dog and watch for any indication that he’s about to mark — sniffing, spinning, doing fast direction changes, lifting a leg — and interrupt him immediately with a firm “Oops!” Then issue a command, such as a sit, stay or lie down. Whenever supervision or alternative activities aren’t possible, kenneling can be a great backup management tool.

It’s also important to eliminate urine odors by cleaning and deodorizing the areas where your dog most often marks — and make them less appealing by coating the surface with a repelling scent. To fully eliminate odors on floors, wash with an antiseptic disinfectant liquid twice a week for one month. Opt for an enzymatic cleaner on upholstery or carpeting, and clean the area twice a week for a month.

If possible, limit your dog's access to the areas where he has previously marked or try feeding your dog in those areas, so he identifies them as positive places where he eats, rather than places to mark.

Separation anxiety is another common emotional trigger for marking, which can be addressed by your vet or a certified dog trainer. As a last resort, antianxiety medication may help reduce the problem, so talk to your veterinarian about whether this option is appropriate for your dog.