Home ›
Our Pet Experts ›
Mikkel Becker ›
How Can I Teach My Dog to Play Fetch?

How Can I Teach My Dog to Play Fetch? 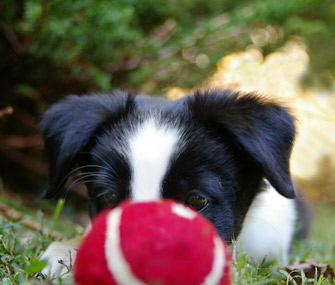 Q. My dog retrieves the ball, but she doesn’t return it to me. How can I teach her to bring the ball back rather than playing keep-away or running off and chewing on it?

A. Fetch is a lot more fun when you aren’t trotting after your dog and tugging the ball out of her mouth every time she picks it up. Getting your dog to return the ball is a matter of training, but first you need to figure out why she's not doing this already.

Why Does Your Dog Keep the Ball?

There are several possible reasons why your dog doesn't return the ball to you. A Labrador Retriever I worked with would return the ball one or two times and then refuse to give it back. At a visit to the veterinarian, the pooch was found to have hip dysplasia. He wanted to play but was in too much pain, so he kept the ball. A combination of losing weight and getting his hip treated solved the problem and enabled him to happily play fetch with his owner.

For many dogs, there is some other activity that is more fun than fetch. I worked with a Shepherd who loved to chase the ball but wouldn’t return it; to him, getting to gnaw on the ball for a few moments was more rewarding than having the ball thrown again. We solved this by alternating throwing the ball and handing it right back to him to chew on.

Some dogs enjoy chasing and being chased; for these dogs, the best part of the game is when a human runs after them to get the ball. If you want your dog to play fetch — rather than chase — ignore her when she runs away and reward her only when she brings the ball to you.

Some dogs don't return the ball because they perceive having to give it back as a punishment. For the same reason, a dog who is asked to do a sit stay when she returns the ball may see this as a loss of freedom. Keep the game moving to keep your dog happy.