Home ›
Our Pet Experts ›
Mikkel Becker ›
How Can I Teach My Dog to Sit When Greeting?

How Can I Teach My Dog to Sit When Greeting? 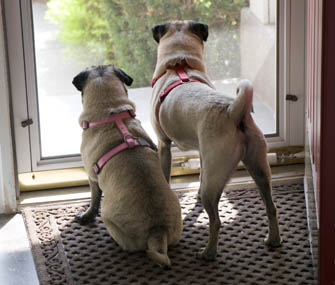 Q. My dog will sit to greet when she first encounters a person, but after a couple of seconds, she starts to jump. She will go back into the occasional sit but will not stay in that position. What can I do?

A. The good news is your pooch is already familiar with the alternative to jumping, which is sitting when she first meets someone. The problem, of course, is getting her to keep all four paws on the ground for long periods of time, especially in heightened greeting situations.

Why Your Dog Jumps

She may also jump during petting. Dogs don’t always know how to handle petting without becoming overly excited, which can lead to jumping. To prevent this, teach your dog to do either a sit stay or a stand stay while being petted. It’s best for the most animate jumpers to remain sitting while being petted, but some dogs feel more comfortable standing. It may help to add a cue to the behavior, both to inform your dog of what’s going to happen to her, which is petting, and what is expected of her, which is either to sit or stand still. You can use a phrase like “say hi” right before the dog is petted, to let her know what's coming and how to behave.

Teach Her to Sit When Saying Hello

In my dog training classes, we start with the dog’s handler giving the cue to sit or stand, followed by the “say hi” cue. Then the handler gently strokes the dog on the shoulder or side. If the dog doesn’t jump but remains sitting, she is rewarded with a “good” and a treat. If the dog jumps, the handler freezes like a statue and waits until the dog sits again.