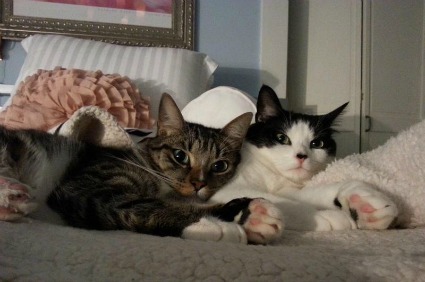 “I am a convert!” exclaims Gisela Hausmann of Greenville, S.C. Although she never hated cats per se, Hausmann was raised to believe dogs and cats were a lot of trouble and work.

She carried that belief into adulthood. After her husband died, her heartbroken kids begged for a pet. “I kept saying, ‘Not now.’” But, she says, her daughter in particular really wanted a pet. Then, Hausmann had a moment of truth. “By the time my daughter was 15, it occurred to me that if I did not adopt a cat right now, my daughter would be moving out before I'd show the guts to deal with the trouble.”

So, she adopted Dixie from a local shelter, and from that moment on, she was a bonafide cat lover. After the kids moved out, Dixie remained with Hausmann until the cat died. Then, Hausmann adopted a new cat, Artemis, and soon after, Yin-Yang as a playmate for Artemis.

Hausmann, an author, says when she’s writing a book, she reads the drafts to her cats. “Today, it is clear to me that Hemingway knew what he was doing,” she muses. “Cats help authors, who have to work alone sitting at a desk..., to be balanced.” 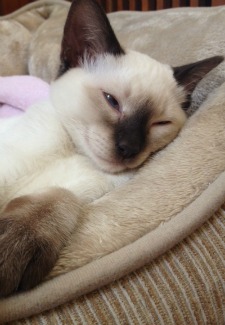 Photo credit: Ann Pryor
Lily changed Ann Pryor's longtime dislike for cats the minute she climbed into her lap and went to sleep.

You Had Me at Meow

Ann Pryor of Queens, New York admits she, too, used to hate cats. “I had been scratched by cats, had cats walk across me like I wasn’t there. I thought their litterboxes stank and that they were evil,” she explains.

That all changed when her mom decided to get a Siamese kitten named Lily to keep her company. “One afternoon Lily, still a baby, crawled into my lap and fell asleep. For the first time I experienced a strong love toward this tiny, helpless, sleeping creature!"

After that, Pryor says, she and Lily bonded. “We adore each other,” Pryor says.

What’s more, Pryor says she’s developed a love for all cats, frequenting the local cat cafe, Koneko Cat Cafe, and even regularly feeds the feral cats in her neighborhood.

Despite these cat lovers’ preconceived notions, their first cats won their hearts. So, the next time you hear someone say, “Oh, I don’t like cats,” ask them: “Have you ever really known one?” It’s likely they haven’t.