Home ›
Our Pet Experts ›
Mikkel Becker ›
How to Pet a Dog

How to Pet a Dog 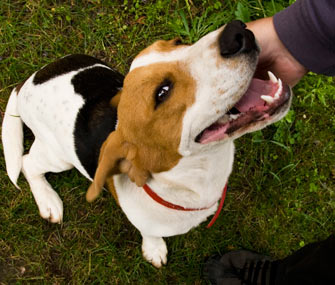 The way you pet a dog can make you his favorite person — or the human he’s always trying to avoid. Certain red-flag petting tactics send most dogs running in the other direction, while other petting strategies will have a dog tail-waggin’ happy in your hands. Whether you’re petting your own dog or one you’ve just met, here are some strategies for better petting, including petting styles to avoid and those to employ.

Start With a Proper Greeting

The first rule of petting is never pet a dog who doesn’t initiate contact. This is especially important to enforce with children, who will often approach a dog who is lying down, cornered in a room or actively trying to get away.

Rather than reaching out and touching the dog, invite him to make the first contact by squatting down so you are closer to his level; with a reserved or fearful dog, turn your body to the side to make yourself less threatening. If you’re dealing with a confident dog, you can invite him to approach you by bending over slightly, patting your legs and backing up while coaxing with your voice.

Avoid hovering over the dog when greeting him; this can be perceived as a threat. Instead, turn your body slightly to the side and make minimal eye contact at the first greeting (eye contact can also be interpreted as a threat). Instead, allow the dog to approach you first. With a shy dog, pretend to ignore him and look away for the first few moments until he discovers you’re safe to approach.

A friendly dog will approach with his ears held back slightly and his tail held out at medium height behind him, with a wide sweeping wag. When the dog sniffs your body, he is gathering information about you, not necessarily inviting you to pet him. If he backs away or acts leery or jumpy, don’t pet him. If he exhibits a loose, wiggly body posture with relaxed eyes and mouth as he moves toward you or if he initiates brief eye contact, he is most likely indicating friendliness and a desire for interaction.

Once the approach has been made, pet the dog slowly in areas where he is comfortable being touched. A dog who enjoys petting will usually lean toward you or actively seek contact with you when you stop petting him. If the dog attempts to move away or displays signs of discomfort, such as licking his lips or showing the whites of his eyes, give him some space.

Most dogs are comfortable being petted on the chest, the shoulders and the base of the neck. When petting these areas, reach in from the side, rather than moving your hand over the top of the dog’s head. Individual dogs also have specific spots where they like to be petted; common areas are the base of the tail, under the chin or on the back of the neck where the collar hits. Most dogs dislike being touched on top of the head and on the muzzle, ears, legs, paws and tail. Slow petting, similar to gentle massage or light scratching, can calm a dog down. Place your hand on an area where the dog enjoys being handled and gently move your hand or fingers in the same direction the fur lies. Petting should be calming and therapeutic for both dog and person, both reaping the mutual benefits of shared contact. When you pet a dog in a relaxed, slow and gentle manner, he is likely to lean in tight for more.