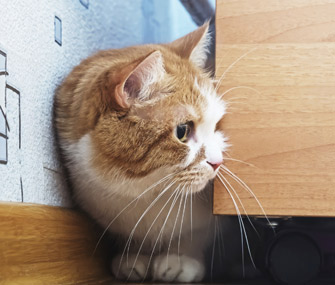 Thinkstock
Is your cat hiding? That's a clue that he might be sick or in pain.

It happens all too often — by the time an owner realizes her cat is sick, the cat is very sick. Cats tend to hide their illnesses, and they even hide themselves when they're ill. But many problems are best treated when they're caught early, which means you are your cat's most important health care provider. You're the one who sees him every day and decides when he needs to see the veterinarian. Don't ignore what he's trying to tell you — or trying not to tell you. Here are just a few of the clues you should look for.

Is he acting differently?

The most common sign of illness in some cats is hiding in a quiet, out-of-the-way place. Sick cats often lie quietly in a hunched position.
They might neglect grooming. They may be purring, which cats do not only when they're happy, but also when they're sick or in pain. A cat with breathing difficulties may refuse to lie on his side and may keep his head raised. Cats with neurological problems may be confused, have seizures or press their heads into furniture or walls. This is not the head butting that cats do on your leg affectionately but rather prolonged pressing on a surface.

Is he eating, drinking, urinating or defecating more or less than normal?

Cats who don't feel well usually don't want to eat. Some illnesses, however, can cause increased appetite, so don't ignore your suddenly ravenous cat. Increased thirst and urination may indicate kidney disease, diabetes or other illness. Frequent, sudden attempts to urinate, especially if only small amounts are produced or if accompanied by signs of pain (including meowing or straining in the litterbox), may indicate a urinary tract infection or blockage. Inability to urinate is a life-threatening emergency that is all too common in cats, especially males.


Is he regurgitating or vomiting?

If your cat regurgitates food soon after eating, he may have a problem. Vomiting food after it’s been in the stomach can indicate poisoning, blockage or a host of other problems. If your cat vomits for more than a few hours or vomits repeatedly for more than a day, she probably needs to see a vet. And if any vomiting episode is accompanied by lethargy, diarrhea or reluctance to move, you should seek medical attention. When in doubt, it is always better to call the vet instead of waiting to see what will happen.

Does he have diarrhea or constipation?

Diarrhea can result from nervousness, a change in diet or water, food sensitivities, intestinal parasites, infections, poisoning or many illnesses. Watery diarrhea, diarrhea with blood, or diarrhea accompanied by vomiting or other signs of illness warrants a call to the veterinarian. Cats commonly become constipated. They may strain to defecate; cry or meow in the litterbox; pass only small, hard feces; or pass small amounts of watery feces. Examine your cat's litterbox to make sure he's defecating as he should be.

Coughing can be caused by a variety of conditions, including foreign bodies, hairballs, allergies, asthma, tumors, heart disease, lung disease or several contagious illnesses. If coughing persists for more than a day, don't wait — contact your veterinarian. If your cat is coughing over and over, has difficulty breathing or has bluish gums, he needs to see his veterinarian immediately.