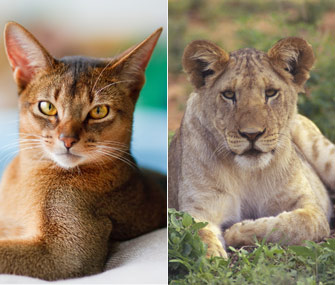 Thinkstock
August 10 is World Lion Day, dedicated to raising awareness of the conservation issues affecting lions in the wild. Big cats appeal to us in large part because they have similarities to pet cats. In fact, there are significant ways in which lions are more similar to domestic cats than other wild felines, but there are some interesting differences, too. We spoke to John Bradshaw, author of the book Cat Sense, about how your cat is — and is not — like a lion.


There are only two cat species in which the females raise their young together: the lion and the domestic cat, Bradshaw says. Lions live in prides where the females care for their cubs together. Similarly, when cats are living outdoors on their own, three or four females will put their kittens in one nest that they all defend. The mother cats will also go out hunting and bring back food that they allow all of the kittens to eat. Breeders and rescuers can make use of this behavior by putting orphaned kittens or those whose mothers are short of milk with another nursing female. "What they're taking advantage of is the fact that mother cats basically don't seem to recognize their own kittens, which is unusual," Bradshaw says.

However, the social lives of domestic cats and lions differ on the male side. "In lions, the males also cooperate," Bradshaw says. "It's virtually unheard of for male domestic cats to cooperate." Although we think of there being one male lion in charge, Bradshaw says that actually a pride includes a group of males, usually closely related to each other but not to the females. "The reason they are in a group is to defend those females from other groups of males," he says. That defense is important to the survival of the pride; when a new group of males takes over, Bradshaw says, "the first thing they do is kill all the cubs. [The new males] know they're not theirs, because they've only just arrived, and they want to get the females breeding again as soon as possible so they can produce offspring of their own."

For big cats, that social cooperation extends to hunting as well: Though domestic cats hunt alone, lions usually hunt together. "It's mostly the females that do it," Bradshaw says, "and the males kind of tag along and take the best bits after the females have done all the work." According to Bradshaw, those different hunting styles are connected to the different kinds of prey that domestic cats and lions eat. "The reason that lions can afford to be sociable is that they have the ability to hunt very large animals that will feed several lions for a day or two," he says. Domestic cats likely never evolved cooperative hunting because of their small size — even in groups they couldn't compete with larger predators, so they stuck with the solo hunting of small prey.