I Live With a Cat Who Acts Just Like a Dog 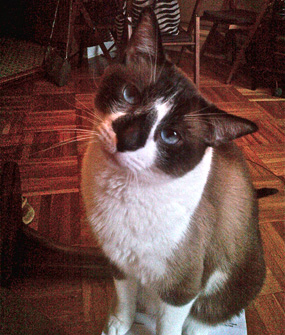 I know that my cat, Mina, wouldn’t mind me calling her a prototypical feline. After all, like most members of her species, she has a royal countenance that screams, “I reign supreme. Just accept it already, and get me a treat. Then, maybe, if you don’t irritate me too much, I’ll make you my court jester.” I grew up with cats who carried themselves similarly — although some were sweeter and some were edgier than the rest — so I was never surprised by her manner.

When my husband, Andrew, and I decided to adopt a kitten as a companion for her six years ago, I figured that the next one would be the same way. It turns out, I was barking up the wrong tree. Somehow, despite all appearances, I ended up with a dog-cat.

The Makings of a Classic Starter Cat

When I think back, I realize that the distinction between the two animals may have seemed even more pronounced because Mina has always been so intensely catlike: She is a purebred Chocolate Point Siamese, with a delicate head, long whiskers, bright blue eyes and a perfect ski jump nose, balanced on a long neck. Even as felines go, she is particularly elegant, graceful and feminine, jumping to incredible heights from a standing position without apparent effort.

From the beginning, she was conscientious about her appearance, grooming herself constantly, and she tried to groom people with her sandpaper tongue, too — if they let her. When I went to sleep at night, she followed me onto the bed, padding and circling until she found the perfect cozy spot against my legs. Once slumbering, she remained entwined in a perfectly circular ball for the entire night.

Temperamentally, she has always liked a lot of attention — but only on her terms. When the mood strikes, she tiptoes up to you and commands (with a throaty meow) that you squat down close to her, so that she can purr and rub her cheek against your own.

Actually, it was that shrill cry that prompted us to consider another cat. Mina would meow frequently late at night — and the sound was not at all melodic. We wondered if maybe she was lonely. Andrew wanted a puppy, but I nixed that idea. I’d never had a dog before, and they seemed like too much work. Plus, Mina was surely going to rebuff some big canine!

So when a neighbor of ours who rescues cats mentioned to Andrew that she was fostering a kitten who also appeared to be part Siamese, Andrew figured that we had nothing to lose by meeting him.

Of course, we were lost the moment the woman entered our apartment with this little guy asleep in the palm of her hand. He looked tiny by comparison to Mina, although she was only a runty 7 pounds. Who could resist a 3-pound kitten, especially one who already showed signs of a big, lopsided black spot splashed across his nose?

We named him Waldo, and although Mina did not seem impressed with her new brother, he quickly became a part of our family.