Home ›
Our Pet Experts ›
Linda Fiorella ›
I Work With Animals: My Life as a Cat Circus Ringleader

I Work With Animals: My Life as a Cat Circus Ringleader 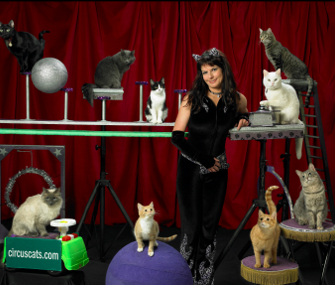 Samantha Martin takes the phrase “let’s get the show on the road” literally.

When her cats aren’t posing for kitty litter labels or cat toy packaging, Martin travels the country putting on shows with her talented troupe of felines who play instruments and perform circus tricks as The Acro-Cats.

The journey to making a full-time living with her pet house cats — who, she says, “have more furniture than I do” — was not without its bumps, including a failed attempt working with ferrets.

But now her audiences come out en masse to watch her skilled cats take to the stage — and even pick up some simple techniques from Martin for training their own circus-worthy felines back at home.

Q. How does your show differ from a traditional circus?

A. Martin: "There are some similarities because they are doing circus-style tricks. They roll balls, walk on a high wire, climb ladders, perform hoop jumps and more. One cat will jump on a medicine ball, balance on it and roll it. But the difference is that it’s all free will. If they want to jump through a hoop, they do, but if they’re not feeling it that performance, they don’t. The show has two parts: The Acro-Cats do the tricks, and The Rock Cats play guitars, percussion and keyboards with a chicken who plays the cymbal and the tambourine."

Q. How do you get them all to shows hundreds of miles from home?

A. "I have a 33-foot RV that has been modified, with a space above the cab that I call Kitty City. The band members don’t like the rest of the cats, so they have their own quarters. We actually renegotiated their contracts — the band cats used to be Acro-Cats, but they decided that they were just going to be in the band."

Q. The band cats sound a lot like human musicians. Are they divas?

A. "They are like a real band. They tolerate each other on stage as long as they stay within their parameters. But when drummer Dakota’s tail invades Pinky the guitarist’s territory, Pinky will get upset."