Home ›
Our Pet Experts ›
Nora Zelevansky ›
I Work With Animals: My Life on a Goat Farm

I Work With Animals: My Life on a Goat Farm 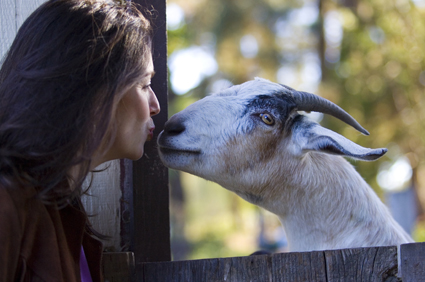 Courtesy of Laura Howard-Gayeton
The ice cream entrepreneur behind Laloo's Goat Milk Ice Cream Company steals a kiss from one of her beloved goats, Buttercup.

Laura Howard-Gayeton gives new meaning to the expression “get your goat.” The former Hollywood producer went from living a fast-paced life in Tinseltown to running a five-acre Petaluma, California, goat farm and a successful boutique ice cream company, Laloo's Goat Milk Ice Cream Company, which sells delicious and fanciful flavors such as Strawberry Darling with a balsamic reduction.

So what would convince a woman to trade in a life of glamour for one spent day in, day out with goats? A horse, of course. We sat down with Howard-Gayeton to talk about what it's like to work with divas of another kind: farm animals.

A: Laura Howard-Gayeton: "I have always been a horse person. In fact, I had one when I was living in L.A. named Joaquim, who I rode in Griffith Park. And I love being outside and the idea of a more rural lifestyle. Plus, I was kind of at my wit's end in terms of sitting in traffic. I'd gotten into yoga, and through that, I learned that I wanted to live a happier life in every way."

A: "I drove all over Northern California and stopped whenever I saw goats in the fields. I actually knocked on doors and talked to all these farmers — a lot of which were women. It was just fascinating.

I'd had my heart set on Healdsburg, but then I realized that most goat farmers were in the southern part of wine country, like Petaluma and Sebastopol. I found a five-acre farm to rent, which cost less than the mortgage on my L.A. house. I packed up my horse, moved up north and started learning about how to make a pasture for animals. My first goat started as a companion for my horse."

Q: How did you get the idea to make goat's milk ice cream? 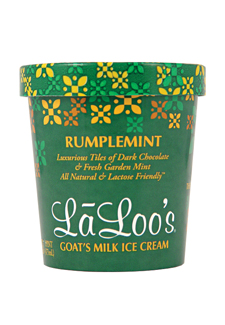 A: "I was trying to relax and get healthy, and one thing that was recommended to me was to cut down on traditional dairy. So I did some research on other ways to make ice cream, got a handful of goats and started to raise and milk them myself. Laloo took off quickly because no one else was doing this at the time, so I bought a bigger property, right next to another dairy."

Q. So what does your daily life look like now?

A: "In the kidding season, we're very busy milking the girls. On a daily basis, we need to feed the animals twice, and bring them in at night. Their barn gets cleaned out about once a week, but we have to do it more often in the rainy season, which is nearly upon us! We also need to give the goats a pedicure every few months, which is a challenge — especially for the boys!"

Q: What's the best thing about your new life?

A: "My goats! I love them. They’re part of my family. My husband and I have about a dozen, most of which are Nubian. We also have one Alpine and one LaMancha goat. We also have a second horse, chickens (and fresh eggs every day!), a cat, a dog and even a rare bird that flew onto our property. We couldn’t find its owner, so it lives with us now. We have quite the menagerie."

Q: Do all the animals get along well?

A: "Oh, yeah. They’re buddies. We took in two twin baby goats named Sugar and Spice last spring from a neighboring farm after their mother died in childbirth. Our horse Mo would lie down for them and they'd just climb on his back!"

Q: How is the ice cream business doing?

"It’s great. I have four employees now, and we’re distributed nationwide in Whole Foods stores. We’re bigger than the average local ice cream shop, but much smaller than Ben & Jerry's. Most recently, we launched frozen yogurt and ice cream sandwiches, but we’ll have some announcements to make this spring about new flavors! It should be exciting."

Q: What’s something that people might not know about goats?

A: "A lot of goat farmers remove their goats’ horns. But we leave the horns natural, so the goats get into a fair amount of trouble!"

For more tales of what it's like to work with animals, check out these other Vetstreet-exclusive stories.