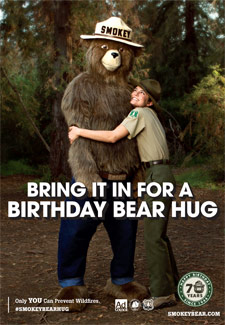 Courtesy of the Ad Council

August 9 is the 70th birthday of one of the most famous fictional animals in America. Smokey Bear was created in 1944 as spokesbear for a national forest fire prevention campaign, and he's still going strong. In celebration of Smokey's birthday, we're looking back on his history, his real-life counterpart and why his message is still important.

In spring 1950, after a major forest fire in the Capitan Mountains of New Mexico, firefighters found a bear cub in a charred tree with burns to his paws and hind legs. When the state fish and game department had the cub flown to Santa Fe for veterinary care, the story basically went viral: It was picked up by national news agencies, and people from all over the country wrote and called to find out how the cub was doing. At first called "Hot Foot Teddy," the cub's name was changed when people realized that there was a job opening he was perfect for: as the living symbol of Smokey Bear, a character who was teaching Americans how to prevent fires like the one that had injured him.

The newly renamed Smokey was offered a home at the National Zoo in Washington, D.C., but it wasn't easy to get him there. When the commercial airlines couldn't be persuaded to let him travel in the passenger compartment or have a human accompany him in the baggage section, the Piper Aircraft company came to the rescue, providing a small plane painted with Smokey's name and an illustration of him with his arm in a sling and wearing his iconic hat. After an overnight stop at the Saint Louis Zoo, Smokey was greeted by crowds of fans and media in Washington on June 27, 1950.

Smokey became so popular that he was given his own ZIP code for the 13,000 letters he received each week and had three full-time assistants to answer them. He dined on trout, bluefish and peanut butter sandwiches, and in 1962, the zoo got him a mate, a female named Goldie, who arrived with much fanfare, including a motorcycle escort and giant wedding ring. Sadly, they never had offspring, although in 1971, an orphaned cub named Little Smokey was brought in to succeed the famous bear.

Smokey retired in 1975 when he was 25 years old. In bear years, that's roughly the federal mandatory retirement age of 70, and he was given a membership card for the National Association of Retired Federal Employees. Overshadowed at that point by the famous pair of giant pandas that had arrived at the zoo in 1972, Smokey lived out his final days there until his death on November 9, 1976. Many newspapers ran obituaries. The Washington Postobituary, headlined "S. Bear, Firefighter," read in part:

Although he had no formal schooling, Mr. Bear was accepted into the Park Service shortly after his arrival in Washington, and remained with that agency until his retirement a year ago this month. ... Like many Americans on a fixed income, Mr. Bear found that he did not have enough money to retire to a specially constructed grotto in New Mexico, as he had originally planned. Instead, he moved to a cage in the zoo next door to the cage he had occupied for years.

Mr. Bear was married in 1962 to the former Goldie Bear, who was not a blood relation, despite the similarity of last names.

Smokey was buried at Smokey Bear Historical Park in his hometown of Capitan, NM.