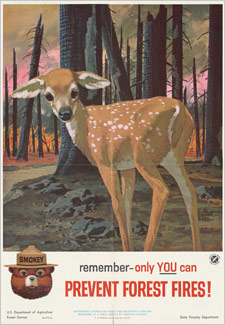 Courtesy of the Ad Council
In 1944, Walt Disney's Bambi was the spokesanimal for forest fire prevention.

History of a Symbol

Smokey actually wasn't the first spokesanimal for forest fire prevention: Walt Disney's Bambi, a fictional forest fire survivor, was used on a poster in 1944. But the studio gave permission to use the character for only one year, so a replacement needed to be created.

Bambi's probably kicking himself now that he lost the job, because Smokey became the centerpiece of the longest-running public service advertising campaign in U.S. history, from the first poster depicting him pouring a bucket of water on a campfire to his latest social media campaign, where he rewards people with a bear hug for their fire prevention efforts.

His appearance has changed with fashions in illustration, but he's still one of the most recognizable fictional characters ever. Surveys show that 96 percent of American adults recognize him. And Smokey has definitely kept up with the times to communicate his message: He has 180,000 Facebook fans, 22,000 Twitter followers and more than 620,000 views on YouTube.

By the way, while readers of a certain age might find it irresistible to call him "Smokey the Bear" — doing so became common after a 1952 song was released that included the extra word to fit the song's rhythm — his proper name is and has always been Smokey Bear, without the "the."


What Smokey Wants You to Do

The new slogan is important because forests are not the only places where you need to be aware of fire risk. "There might not be any trees around for miles in places where you could have devastating wildfires that are caused by accidental human starts," says Acting National Fire Prevention Coordinator Fred J. Hernandez of the U.S. Forest Service. 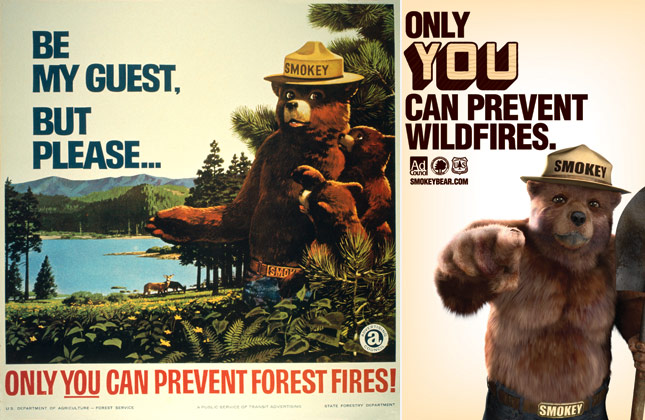 Grasslands, brush and areas around homes and buildings and on the sides of highways may not seem like Smokey Bear habitat, but fires can start in those places, too. And although people tend to think that wildfires are started by lightning, 80 percent were caused by people in 2013 — and some years that statistic is closer to 90 percent, Hernandez says.

You may think you'll never be the culprit because you know better than to throw a cigarette butt out the window or leave a campfire burning, but fires can start when you're doing things that, from your point of view, have nothing to do with fire.

"A lot of people don't understand they can start fires with a lawn mower, or that if they park in high grass, their catalytic converter is hot enough to start a fire," Hernandez says. "If you pull over on the side of the highway for a problem with your vehicle or to make a phone call, if it's hot and dry and there's tall grass, that can start a fire."

There are other ways you can start a fire with your vehicle and be unaware of it. Chains dragging from a trailer tow can cause sparks, and overheated brakes can eject hot pieces of metal and brake pad. "Sometimes we'll find five or six fires down a highway corridor, and the person who started them doesn't even know [he or she] started them," he says.

And even putting out that campfire may not be as easy as you think. "That's still a big problem," Hernandez says. "We still find fires that are left hot in Forest Service campgrounds. We ask folks to drown, stir down and then feel." If it's not cool enough to put your hand in the remains, it's hot enough to pose a risk.