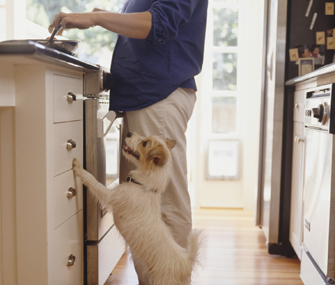 Let's face it: Bad behavior gets attention, even though it's not typically positive attention. But sometimes ignoring bad behavior is the best way to get it to stop. Believe it or not, giving your dog the cold shoulder when he does something he shouldn't, can be the first step to solving a behavior problem.

Not all behaviors will diminish as a result of the cold shoulder tactic. Ignoring your dog when he digs in the flower beds, for instance, will likely have minimal impact on his behavior, largely because the human reaction isn’t really the reward for the digging. Other factors, such as the release of excess energy, the sensation of cool dirt and the discovery of hidden scents and treasures, are more important to your dog in that moment. But for behaviors that are repeated primarily to get a rise out of you, ignoring can be a powerful tactic.

When to Withhold Your Attention

Recently I was working with a Golden Retriever puppy who would mouth and jump on her owners during walks. Her owner's reaction was to look down at her, talk to her and tell her “no,” and then quickly move her hands away from the puppy. The puppy’s reason for jumping and mouthing at her humans was clear from her perspective: “When I walk calmly by my human’s side, I don’t get the attention I crave, but I’ve learned that when I jump up and mouth her hands, she looks at me and talks to me. Why, she's even turned it into a fun game by pulling her hands up in the air!”

The solution to this particular situation was clear: To deter the jumping and mouthing, the puppy's owner needed to take away the reward — the attention the puppy was getting for this behavior. As soon as the puppy would jump and mouth, I would have her owner stop and stand still in a statue-like fashion with as little reaction as possible and no pulling away of her hands and no speaking to or looking at the puppy. When the puppy stopped mouthing and jumping, the walk could continue. Just as important, I taught the owner to give her puppy the attention and praise she wanted during the times when she was walking calmly by her side. The puppy quickly learned that jumping and mouthing were no longer pleasurable because the reward of attention and fun was gone. More important, she learned that an alternative behavior — walking quietly — would be rewarded with attention, praise and the occasional treat. Problem solved.

How to Encourage an Alternative Behavior

An important key of ignoring bad behavior is to teach the dog an acceptable alternative behavior to perform in its place. Let's think about dogs who jump on humans to say hello. Your dog’s main reason for jumping on you, of course, is to get your attention. While just ignoring the behavior will decrease the jumping, it won't stop it. It's essential that your dog has a new option for greeting people that will be rewarded with attention and petting. Ignore your dog when he jumps on you and reinforce him with petting and praise when he sits. If he jumps on you again, ignore him until he sits, and then pet and praise him. In a very short time, your dog will learn that sitting down to say hello reaps the best rewards — petting and praise — while jumping gets him nothing.