I’m So Happy You’re Still Here: A Love Letter to My Dog 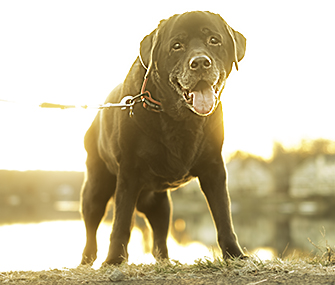 Once my chocolate Labrador Retriever turned 7 years old, I spent each year dreading the fact that he was getting older — and fearing the end was getting closer. But after Grizzly turned 13, it was like a weight was lifted from my shoulders. Suddenly, I felt like any time we had left was icing on the cake.

You see, I’d spent my whole life wanting a dog, but my family never had one. So when my then-fiancé and I bought our first home in 2002, we immediately got the puppy we'd wanted for so long. Grizzly was in our home before the moving trucks arrived, and I was delighted to snuggle with the 8-week-old brown ball of fur I’d been dreaming of as the movers unloaded boxes around me.

Since then, Grizzly has comforted me through heartbreak, excitedly greeted our daughters when we brought each of them home from the hospital and inspired my oldest daughter’s first laugh.

Now that my girls are 8 and 10 years old, he loves playing hide-and-seek for treats and “helping” me make their lunches in the morning. For the last six years, I’ve worked from home, and he’s been the ultimate co-worker, getting up with me at 5 a.m. to meet a daily deadline and habitually taking his place at my feet while I write.

Dogs often become fixtures in your home, sleeping in the corner, greeting you at the door. As much as we love them, it’s easy to take it for granted that they’re there—and that they'll continue to be there. But many times recently, it has struck me how lucky I am that Grizzly has made it to 14 ½ years old. I stop what I’m doing and look right in his eyes and hug him, telling him how happy I am he’s still here.

The first time Griz needed help getting up the stairs at night, when he was about 11, I stood at the bottom with him and cried, assuming the worst. But it turned out that he simply needed encouragement — and he got just that from my younger daughter, who was 5 years old and made up a little song for him. “Put one paw in front of the other, and soon you’ll be walking up the stairs!” She’d sprinkle a trail of dog cookies to lead the way, and with a little nudge, he managed. 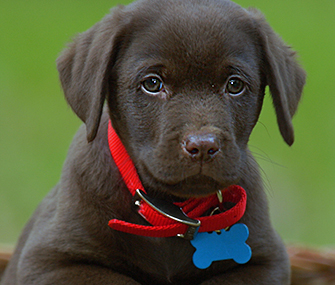 Shannon Ayres
Grizzly before he even grew into his collar, in November 2002.

I’ve rushed to the vet many times over the last few years, fearful of getting news that this was it. But (knock on wood), we’ve been lucky so far.

It’s true that things aren’t as easy as they once were, and Grizzly’s health has declined over the years in many of the ways common to senior and geriatric pets. He can’t hear. He can’t see very well. He has a tendency to have accidents in the house, has grown rather lumpy with fatty deposits and he needs a lot more help on those stairs now, which, of course, we gladly provide.

But by looking at it as “assisted living,” as our vet calls it, we’ve learned to have a sense of humor about “Old Man Grizzly.”

He barks for help getting up off the hardwood floor or going up the stairs to the deck in the backyard — and also when he’s hungry or just feeling a bit lonesome. He’s become quite the determined food thief, likely because he’s deaf and doesn’t hear anyone tell him no anymore, sowe really have to work to remain a step ahead of him when food is nearby. He barely notices when someone stops by the house these days, but once he realizes they've arrived, he happily greets them so they can give him some love. And we’ve realized he now needs more of a schedule for potty breaks, kind of like when he was a puppy.

Our veterinarian says she only sees about 10 percent of Labs live to this golden age. When we asked her about it recently, she attributed Grizzly’s longevity to keeping his weight down, getting good veterinary care and having good genes.

Although he’s slowed down in his old age, Grizzly still loves all the same things. Being a Lab, he devours anything he can get his paws on. He hops up for walks (although they're a little slower and slightly shorter these days) and adores the attention of his family. He’s happy to see anyone who pays him a visit — and we’re all so, so happy he’s still here.