Home ›
Our Pet Experts ›
Mikkel Becker ›
Is My Dog Playing or Being Aggressive?

Is My Dog Playing or Being Aggressive? 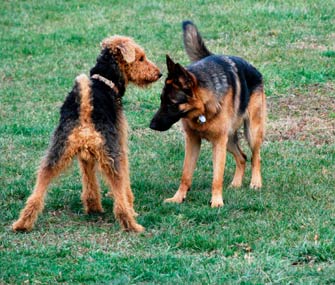 Q. My German Shepherd likes to put his mouth around the necks of other dogs. He doesn't bite, but other owners say it's aggressive behavior. I don't think he's being aggressive, and he has never hurt another dog. Should I be concerned?

A. Play gives your dog an opportunity to make friends, practice dog body language and burn off extra energy. Dog play often involves behaviors similar to those canines use in aggressive encounters, such as chasing and jumping on another dog, mouthing and growling.

One way to differentiate play from aggression is to be aware of the way your dog communicates with other dogs. Dogs use signals designed to show other dogs when an action is being done in play. The play bow is an example of this type of communication. Research by Marc Bekoff found that a dog is more likely to do a play bow — where the dog raises his rear end and drops his front end slightly — just before or after a play move that another dog might interpret as aggressive. The bow signals to the other dog that this is just a game.

There are various play signals to watch for —play bows, for example, which can morph into less exaggerated front paw slaps on the ground as dogs grow accustomed to each other, and bouncier and looser movements than the dog would normally show, such as inefficient Tigger-like hops in the air when running.

In successful play, the dogs will take turns playing different roles; they will start playing with one dog chasing the other, for example, and then after a while they will switch roles and the chaser will take his turn being chased. Role reversals are seldom entirely equal, but there is usually some role reversal seen and some equality in the roles.

Another sign of healthy play is what Patricia Simonet calls the “dog laugh.” The dog laugh is a forced exhalation similar to panting, but with a wider frequency range. Dogs who are enjoying play will also take frequent short breaks to calm and regroup themselves before returning to their games. At all times, the dogs’ body language should be calm, often with relaxed eyes and loosely opened mouths that look a little like the dogs are smiling. Dogs also self-handicap when they are playing, using only a fraction of their actual strength, speed or biting power. When all dogs involved in play are showing these signals, it’s likely the interaction is play-based.

Is It Play — Or Aggression?

A failure to communicate can lead to a breakdown in play. In any play situation, communication needs to be two-sided and both dogs need to be having fun. While some behaviors may be play to one dog, they can be intimidating to another dog and may cause conflict. Canines who are overly forward and lack the skills to read and respond to subtle cues from other dogs may continue to play aggressively even when the other dog is signaling that he needs some space.

Your dog’s behavior — an open mouth on the neck or shoulder of another dog — is a behavior that can be appropriate in play as long as it is mutual play between the dogs and is accompanied by the right signals. If your dog is putting his mouth on other dogs in play but is not recognizing the other dogs’ signals to back off, the play situation becomes non-mutual. The other dog may perceive your dog as a threat and respond with warning signals; if your dog fails to heed these, play can quickly escalate to an altercation.