Home ›
Our Pet Experts ›
Dr. Ann Hohenhaus ›
Is My Pet Sick or Just Getting Older?

Is My Pet Sick or Just Getting Older? 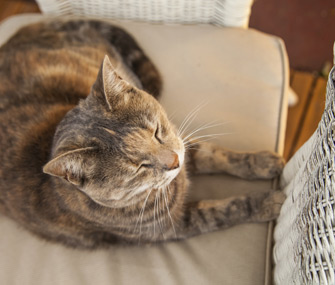 As our pets get older, we expect them to slow down as part of the aging process, but how much slowing down is too much? What signs should pet owners watch out for in their senior pets that may suggest there is more going on than simply normal aging?

What Qualifies a Pet as a Senior Pet?

Senior pets can loosely be defined as those in the last 25 percent of their anticipated lifespan for their species and breed. For example, a cat expected to live 15 years would be considered senior at 11 years of age. What that means to dog and cat owners is that 9 to 11 years of age is the start of your pet’s senior years. One notable exception is giant breeds of dogs who are considered senior a year or two earlier.

Many pet owners assume their pet is slowing down because he is getting older, but that may not be the case; your dog may be moving more slowly because he has arthritis. Since aging is associated with a variety of illnesses, if your senior pet seems to be slowing down, take him for a complete physical examination. Your pet can’t tell you that arthritis is making his joints hurt, for example, but your veterinarian can, and he can help ease your dog's pain. There are medications that can help make your arthritic pet more comfortable and kick his activity level back up a notch. A word of caution, though: Never give your dog or cat your arthritis medication; these drugs are extremely toxic to pets.

Another behavior change incorrectly attributed to aging is loss of housebreaking/litterbox use. Older cats are especially prone to developing kidney problems, and the accompanying increase in urine production. Couple an increase in urine production with creaky joints that don’t move so well anymore and your cat may act as if he has forgotten where to find the litterbox. Placing litterboxes conveniently near your cat’s favorite perch will help overcome this problem.

Some creaky cats can no longer climb over the edge of the litterbox and will “go” right outside the litterbox. Substituting a box with lower sides or a cutout for easy entry will often resolve this situation. Diabetes and urinary tract infections will also cause what appears to be a loss of housebreaking. All of these reasons may contribute to a lack of litterbox use, but the reason may be as simple as not changing the litter often enough to your cat’s liking.

A syndrome is a collection of clinical signs that commonly occur together. Once your veterinarian has determined an illness is not causing your pet to slow down, cognitive dysfunction syndrome (CDS) will be considered. CDS is a decline in brain function in the aging dog exemplified by behavior changes. Dogs with CDS may stand in one place more often, greet their owners less often and have accidents in the house. At a recent conference in New York City, Dr. Chad West, a board-certified neurologist on staff at the Animal Medical Center in New York, discussed a case of CDS in a dog. The MRI findings in the dog were strikingly similar to the second most common cause of dementia in humans, vascular dementia.