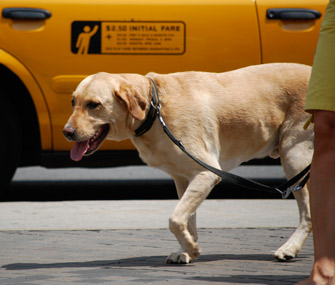 Thinkstock
It can be a challenge to find shaded or grassy areas in a city, but pavement that's too hot can hurt your pup's paws.

I live and work in one of the more densely populated cities in the world: New York City, home to more than 8.4 million residents. Although many would guess there’s not much room for pets, the New York City Economic Development Corporation estimated there were 1.1 million pets living in our metropolis in 2012.

The Big Apple is a wonderful place for both people and pets. We have five-star restaurants, gorgeous parks, world-class health care for both animals and humans, and other amenities such as spas and dog parks. But behind the glitz and glamour of the city, there are potential dangers unique to urban settings. Those risks are a concern for pet owners living in any metropolitan area. Let’s look at some of the more common dangers I worry about for my patients as a city-dwelling veterinarian.

No one knows for sure if cats jump on purpose or fall by accident, but every summer, veterinarians in cities with high-rise apartments treat cats and an occasional dog for injuries sustained when they fall to the ground from apartment windows, terraces and fire escapes. Make sure the screens are tightly installed in every window you open in your apartment — bars might be preferable if they are small enough to keep a pet from squeezing through — and do not let your pets onto unenclosed terraces where they might spy a bird and take a fall as they leap to capture the fluttering creature. Another tip: Don’t put bird feeders on your window sills or terraces, as they will encourage your pet to spend more time near windows.

Many suburban dogs have never been in an elevator. I can always recognize a country dog on a city visit by the startled look on her face and her crouched position when the elevator starts to move. Lots of city dogs, on the other hand, are pros at riding elevators, but this necessity for high-rise hounds poses a serious danger to any pet on a leash. If a dog darts into or out of the elevator just as the doors close, the leash may get trapped in the doors. As the elevator begins to move, the leash becomes a strangulating noose. To prevent this, control your dog as she enters and leaves an elevator, and don’t drop the leash and let her scamper into or out of the elevator car on her own, no matter how cute she looks when she does it.


The Poop on Pigeons

City birds, especially the rock dove or pigeon, pose a danger to city cats beyond their ability to lure your feline onto the window sill or fire escape. Pigeon and other bird droppings contain the fungal organism Cryptococcus. Although related to mushrooms, Cryptococcus is microscopic and round rather than mushroom shaped. Pigeons in particular are an important avian carrier of this organism, and though it can be found in any rural and suburban environment, it is certainly more of a concern in urban areas where pigeons are plentiful. Cats exposed to pigeon droppings on the terrace or window sill inhale the organism. Because of this route of exposure,Cryptococcus infections are most common in the nose and eyes. Life-threatening systemic infections are especially serious and difficult to treat when they involve the brain. Cryptococcus initially resembles an upper-respiratory infection, with sneezing, nasal and ocular discharge, but worsens over time. Swelling over the bridge of the nose and scabby skin will clue your veterinarian in to a diagnosis of cryptococcosis. To prevent this, discourage pigeons from taking up residence on your terrace and keep your pets away from areas where they may congregate. Though dogs are likely to be exposed to Cryptococcus on their daily walks, they seem to be less susceptible to the infection than their feline counterparts.