Home ›
Our Pet Experts ›
Kim Campbell Thornton ›
Life in the Ring: What It's Like to Be a Professional Dog Handler

Life in the Ring: What It's Like to Be a Professional Dog Handler 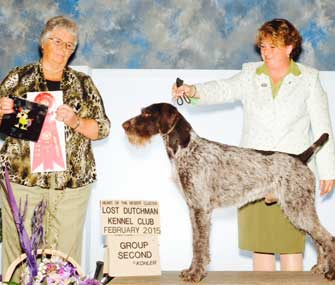 Photo courtesy of Laura Reeves
According to handler Laura Reeves (right), dog handlers work more than full time — she refers to it as a "24/7/365" job.

When Laura Reeves, of Grants Pass, Oregon, discovered after college that the 9-to-5 life of corporate America wasn’t for her, she went to the dogs — in a good way: Reeves traded in her office job for work as a professional dog handler. Her schedule isn't any easier now, though: On the days she's showing, Reeves typically starts her workdays at 5 a.m., exercising, feeding and grooming dogs before taking them into the show ring. After the show, she and her team of assistants exercise the dogs, clean up, eat dinner and feed the dogs. Their day generally doesn’t end until 10 p.m.

If you had always assumed that the job of showing dogs professionally — or handling, as it is commonly known — was as simple as leading a canine around a ring and collecting the ribbons at the end of the show, think again. Show dog handlers work, well, like dogs. And that doesn’t mean they’re lazing around on the sofa all day. Reeves, who began showing dogs in 4-H when she was 9 years old, describes it as 24/7/365 job.

But it's a job she loves.

Dog handling is truly a full-time job; many handlers share their homes with the dogs they show, including those owned by clients who hire them to manage the dogs' training and show schedule. This involves a lot of daily maintenance: Dogs must be cared for, and kennel runs, paddocks, vehicles, crates, bedding, bowls and buckets must all be cleaned. Handlers also spend time each day exercising their dogs, which can include running, swimming or bicycling, to keep them in top shape.

But a handler isn't often home for long stretches; professional handlers travel for 100 to 200 shows annually. And the dogs aren't the only ones getting a workout: Handlers load and unload dogs and gear from their vans or RVs; lift dogs on and off grooming tables; and shampoo, blow dry, clip and trim their charges to perfection.

“I limit the number of dogs I show," Reeves says, "so a normal day will have us showing 10, at most 15, dogs between 8 a.m. and 2 p.m." But her day isn't over at 2 p.m. "Normally, group judging begins around that time," Reeves explains, "and we will show anywhere from one to six dogs in their respective groups, depending on how our day of 'best of breed' winners went.”

That grueling schedule repeats as many as five days a week, and even at home, there’s little downtime. In addition to caring for and training the dogs, professional handlers are running a business, and that means that there are judges to research for upcoming shows, travel and schedule planning to attend to (including deciding which dogs to enter in which shows) and client communication and billing.