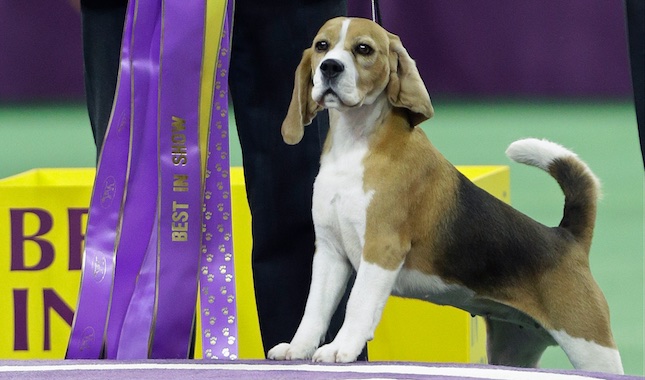 America has a new top dog: Miss P, a 15-inch Beagle, surprised the crowd when she was crowned Best in Show at the prestigious 139th Westminster Kennel Club Dog Show in New York Tuesday night.

CH Tashtins Lookin’ for Trouble, who’s from Canada, was selected by Best in Show judge David Merriam, a retired California trial court judge who breeds Bull Terriers. He didn’t get a glimpse of any of the canine contenders during the two-day competition until he entered the ring at Madison Square Garden to choose from the seven Group winners.

Miss P, who was slated to retire following the show regardless of the outcome, is just the second Beagle ever to win the coveted prize. The first Beagle, named Uno, won in 2008. Miss P pulled out an upset over the clear crowd favorite, the 3-year-old Old English Sheepdog Swagger, and Matisse, a 3-year-old Portuguese Water Dog who’s the top winning male dog of all time, with 238 Best in Show titles under his belt. 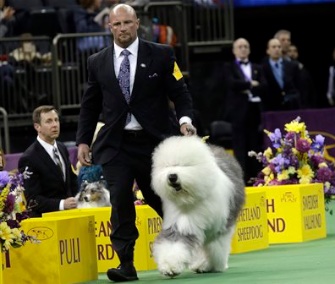 AP
The audience at Madison Square Garden was wild for Swagger, a 3-year-old Old English Sheepdog.

Merriam smiled the whole time he was in the ring with the finalists. “These seven magnificent dogs are a testament to their breeders, their owners and their handlers,” he said as he prepared to announce the winner.

Miss P tried to capture her purple ribbon as her stunned handler, Will Alexander, was congratulated.

“I’m speechless,” Alexander said, as he held the winner in his arms. “They’re all just so wonderful, it could have been any one of them.” Miss P’s win was her second surprise in two days. Bloodhound Nathan was expected to take the Hound Group title, but the energetic Beagle hunted it down it instead, sending her on to the Best in Show ring.

The Reserve Best in Show title, which is akin to the runner-up, went to Skye Terrier Charlie, whose official name is GCH Cragsmoor Good Time Charlie.


Miss P's Path to the Win

Miss P succeeds Sky, the Wire Fox Terrier who stood in the prized Westminster silver bowl after her win in 2014. Following tradition, the 5-year-old dog from California retired after her win. Sky recently had her first litter of puppies and she made an appearance during the broadcast where she smothered veteran commentator David Frei with kisses.

The “big Beagle,” Miss P, was selected from 2,711 dogs making up 192 breeds and varieties in two days of competition. Two new breeds were introduced at Westminster this year: the Wirehaired Vizsla and the Coton de Tulear.

Each dog is judged against a breed standard rather than against each other.

A few of the dogs being closely watched going into the competition were Nathan, a Bloodhound who won the National Dog Show last fall; Matisse, the Portuguese Water Dog who’s a cousin to the Obama family dog Sunny; and Swagger, the Old English Sheepdog who came in second at Westminster in 2013. Those dog breeds were also given strong odds of winning Best in Show by oddsmaker Johnny Avello of the Wynn Las Vegas.

Best of Hound Group: Nathan, the Bloodhound who won the group last year, had a big fan club in the Garden — and online. “He’s a bit of a celebrity,” said Frei. But despite the clear support from the crowd, Nathan lost the Group prize to Miss P, a sprightly 15-inch Beagle from Canada. “It’s a very competitive group,” said Frei when asked if it was an upset victory. “The only surprise at Westminster is if there are no surprises.” The 4-year-old, who’s formally named CH Tashtins Lookin’ for Trouble, quickly won over fans as she hammed it up after her win, barking and biting her handler’s pocket to try to get the treats inside while he was being interviewed about her win. “It means everything; she’s done everything I’ve ever asked her,” said handler Will Alexander. “We battled it out, the two of us, all year long last year and Nathan is such a great competitor.”