Most Popular Puppy and Kitten Names 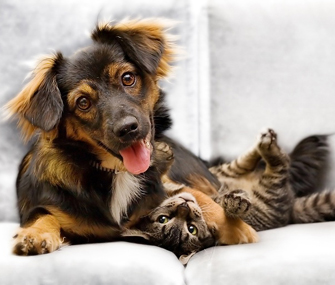 While it's true that each and every pet is a truly special snowflake and, yes, your little guy is absolutely the cutest thing we've ever seen, the names we give our pets aren't always quite so unique — like such old reliable favorites as Spot, Fido and Precious. But times have changed — along with the most popular pet names.

We've culled the names of more than 950,000 puppies and 450,000 kittens born in 2011 from Vetstreet's records to determine the year's top pet monikers. While gathering our data, we also noticed some interesting trends, including owners who dole out pet names normally reserved for human kids.

Bella and Other Pop Culture-Inspired Picks

Thanks to the ongoing craze for all things Twilight, Bella was the top female name for dogs and cats. In the case of canines, it's been No. 1 since 2006, and a top choice for felines since 2007. There's just one question: Once the final movie of the series comes out, will Bella have enough bite to still hang onto the top slot?

Other pop culture-influenced names include Lily (or Lilly) for female cats. Characters with this name appear on Modern Family and Gossip Girl — and it's also Harry's mother's name in the Harry Potter books and films. Speaking of Harry Potter, let's not discount Luna, which made the top 10 female cat names list for the first time this year. 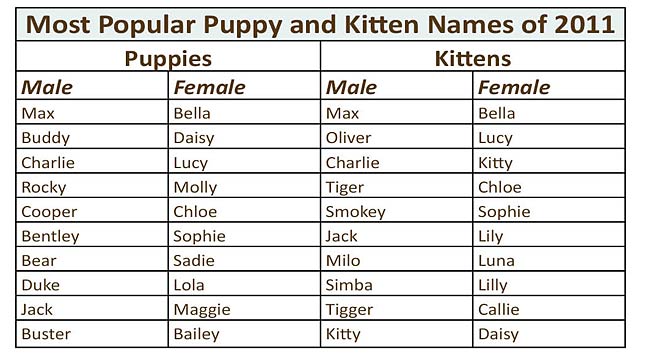 The No. 1 name for male dogs and cats last year was Max. This was the sixth year in a row that it held the top spot for dogs, and the fourth year in a row for felines. Max isn't quite the pop culture reference — unless you count the Grinch's dog — but the name may speak to a different cultural trend: As more and more people treat their pets like children, they also like to give them more traditional human names. Other popular "people" monikers for pets: Charlie, Lucy, Jack and Chloe.

A Look at Old Reliables: Rocky, Bear, Daisy and Kitty

Trends come and go, but some pet names simply have staying power. Rocky has made the top five male dog names list for the past 12 years, while Bear has spent a dozen years on the top 10 male dog names list. Daisy, which made the number 10 female cat names lineup for the second year in a row, also has appeal among dog owners — it's been a top three pick for female pups for the past 12 years. Kitty, the third most popular female cat name in 2011, is also a top pick for male kittens, nabbing the No. 10 slot last year.

Did your pet's name make any of these lists?

For more interesting pet trends culled from Vetstreet's stats, check out these stories.