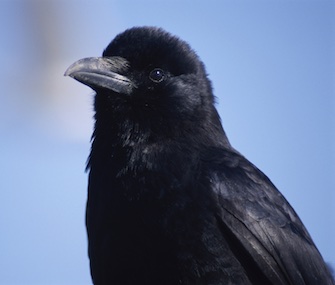 Research from the University of Washington finds that dead crows leave a significant impression on living crows. In an experiment in Seattle, the researchers would deliver food to a particular spot each day, encouraging groups of crows to congregate there regularly. Then, one volunteer would approach with a dead crow to see how the birds reacted. They found the crows would mob the volunteer almost every time. But if the volunteer was carrying a dead pigeon, they were only mobbed 40 percent of the time. Up to six weeks later, many crows would still scold the visitor who’d brought the dead crow, even when they had nothing in their hands. The crows would also take significantly longer to approach food in the days after seeing the dead crow. “It’s amazing to think a crow — a bird — is doing something like this that so few other animals are doing that we know,” said researcher Kaeli N. Swift. The study was published in the journal Animal Behavior. — Read it at The New York Times